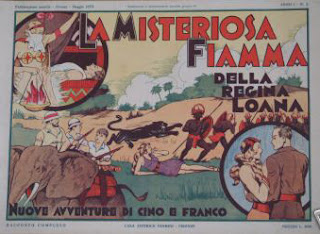 The title of Italian author Umberto Eco's 2004 novel La Misteriosa Fiamma della Regina Loana (The Mysterious Flame of Queen Loana) is taken from the title of an Italian pre-war comics album of an episode of the American comic strip 'Tim Tyler's Luck'. The novel concerns the attempts of an ageing and ill Italian man to recover his childhood memories by going over old books and magazines stocked in a country house he had lived as a child. Prominent among the treasures he rediscovers are vintage comics hidden in a chapel in the garden. Since this blog will chronicle discovering, rediscovering and musing on similar material -though fortunately under less dramatic circumstances-, I find it fitting to title it as such. And hence, it is also appropriate to start it with looking at 'Tim Tyler's Luck'.
'Tim Tyler's Luck' was an American comics strip created in 1928 by Lyman Young, whose younger brother Chic would go on to greater fame with 'Blondie' in the ensuing years. Several ghost artists worked on it, including the legendary Alex Raymond. The title hero was an adventerous orphan who, together with a friend named Spud, settled in Africa after the strip's first few year's of more juvenile storylines, joining a colonial jungle police force called the Ivory Patrol. Even though the strip was sufficiently popular in its country of origin to spawn a movie serial in 1937, it seems to have been more popular in Europe, perhaps because Europeans had more at stake in maintaining colonialism in Africa. In any case, American adventure comics strips of all kinds originating in the pre-war era appears in general to have been more popular in Europe than in the US (whereas American super-hero comics have failed to make much of an impression in Europe).

The first time Tim Tyler appeared outside of newspapers was probably an illustrated story book published by the NY & Ohio-based Saalfield Publ. Co. in 1934 (see the cover above). Two Tim Tyler's Luck 'big little books' would also be published in 1937 and 1939; and the reprints of the strips themselves would be serialized in Ace Comics from 1937 onwards. However, there were no comics headlining 'Tim Tyler's Luck' in the US in the pre-war years. The first US-edition Tim Tyler comic book came only in 1942 and even that was a one-shot publication.
Meanwhile in Italy, Tim and Spud re-named as "Cino e Franco" were the main feature of a comics magazine titled Il Giornale di Cino e Franco published by the the Firenze[Florence]-based comics publisher Nerbini between 1935-38. Nerbini also had published 17 adventures of Cino e Franco in a series of comics albums between 1934-38 and a further ten Cino e Franco albums were put out by the same publisher in a new series between 1940-41 (the Nerbini 'albums' are soft-cover comics books in oblong format).
The first French-edition Tim Tyler album was published by Hachette in 1934 as a one-shot titled Fred et Tim en Afrique. In the ensuing years however, Tim and Spud would be re-named as "Raoul et Gaston" in France. 17 issues of the oblong-format Collection Appel de la Jungle, which ran for a total of 26 issues, published by Moderne between 1938-40 were Raoul et Gaston titles.
After the war, the title was picked up by Sage which initially published nine 8-pages long mini-albums of Raoul et Gaston between 1945-46. Then, Sage began publishing the Aventures et Mystére series whose 19 issues between 1947-49 were Raoul et Gaston titles, most of which were reprints of the pre-war Collection Appel de la Jungle series while some were newer adventures. Below are covers of the some of the Raoul et Gaston titles from Aventures et Mystére series: 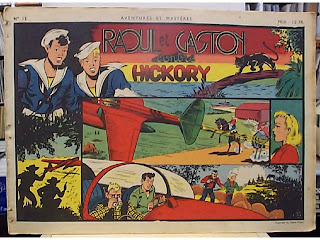 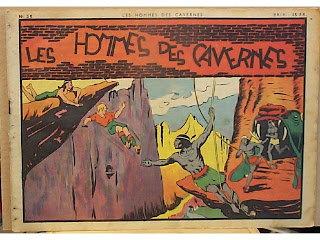 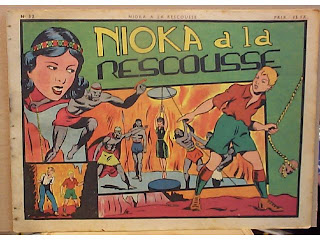 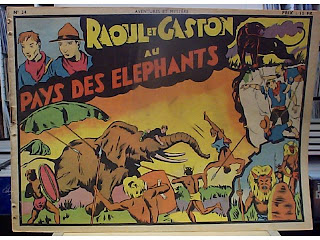 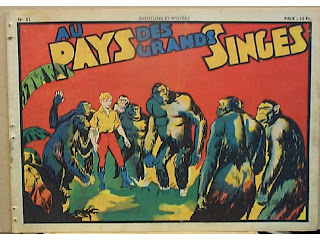 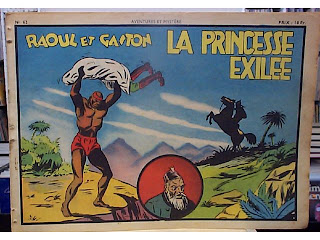 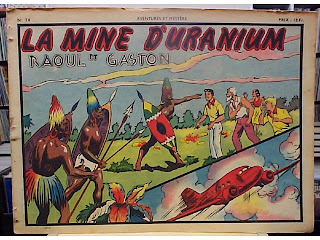 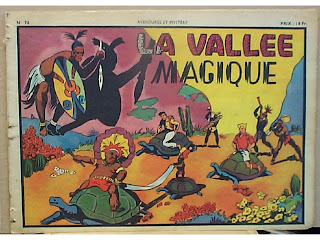 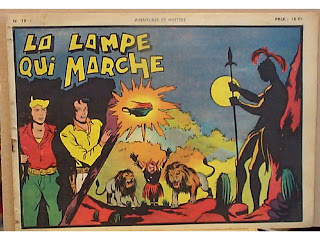 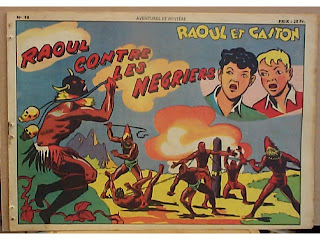 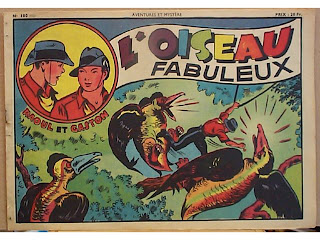 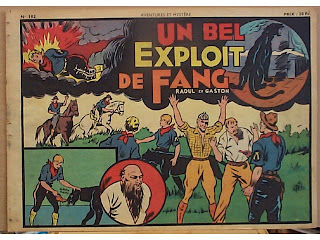 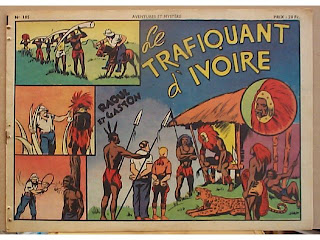 As for the Turkish editions... 'Tim Tyler's Luck' debutted in the first monthly "special issue" of the weekly comics magazine 1001 Roman on January 1940. This first special issue actually headlined Mandrake the Magician and an 8-pages long 'Tim Tyler's Luck' episode titled 'Kara Kaplan [Black Tiger]' was used as filler space. However, 'Tim Tyler's Luck' soon began to be serialized in the main 1001 Roman beginning with weekly no. 39 under the title 'İki İzci [Two Boyscouts]' where Spud was re-named as Sarp while Tim's name remained unchanged. On the other hand, nine monthly "special issues" over the years would be İki İzci titles. Plot synopsises and reviews of İki İzci episodes will hopefully be presented in this blog in the near future.
SOURCES:
http://www.toonopedia.com/
http://www.fumetti.org/
http://www.danslagueuleduloup.com/
Posted by Kaya Özkaracalar at 6:59 AM

I recently watched the serial TIM TYLER'S LUCK and was wondering if the serial villain "Spider Webb" appeared first in the comic strip. I see by one of your entries that Tim faced someone named the Spider but I'm not sure it's supposed to be the same character.

I appreciate any help you can give.