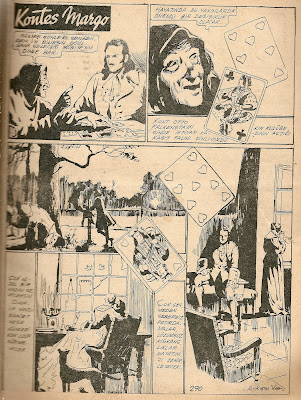 Several pre-war comics of Yugoslavian origin were among the many comics published in Turkey's major war-time weekly comics magazine 1001 Roman during the last two years of its first series (1939-46). Especially the works of artist Konstantin Kuznjecov appear to have been featured regularly between 1945-46. The first comics by Kuznjecov that I have been able to identify as being reprinted in 1001 Roman is the outstanding 'Grofica Margo (Countess Margo)' which was serialized in no.'s 283-327 in 1945 as 'Kontes Margo'. It had originally been published in Yugoslavia's Mika Miš comics magazine in 1938.
'Grofica Margo' is remarkable for both its story and for its graphic qualities. The non-conventional page layout with playing cards imaginatively scattered amongst the panels in the above scan is a good example of the latter quality. As for the story, it is built on a terrific mystery plot with some delicious gothic trappings, both in terms of themes and of motifs. The comics begins with an elderly count living alone in a castle dying of fright at the appearance of a ghosly female figure at midnight. His heirs come to the castle and learn the terrible curse haunting the family. The recounting of origin of the curse entails a very long flashback, running 17 full pages in the Turkish edition. More than 300 hundred years ago, an ancester of the family had married a peasant girl named Margo. Unfortunately, she couldn't bear him a male child and, worried that she might lose her husband because of this reason, the misguided young woman, assisted by her grandmother, kill her female newborn with the intention of replacing the poor infant with a male baby! I guess the theme of maternal infanticide is very rare in comics. This shocking murder is depicted as such in the below panel: 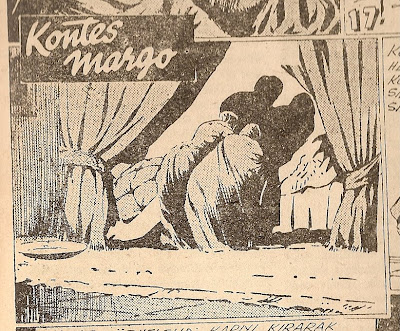 The gruesomely cruel actions do not end here as the husband, who happens to fall onto the scene just too late, has poor Margo walled up in a chamber alive... Her grandmother curses the whole family as a result.
After the long flashback ends, the plot resumes with further appearances of a ghost in the castle terrorizing the new owners as well as some less supernatural-looking attempts on their lives. With secret passages and black hooded figures, it reminds me the best of Edgar Wallace mysteries, esp. The Black Abbot (1926). 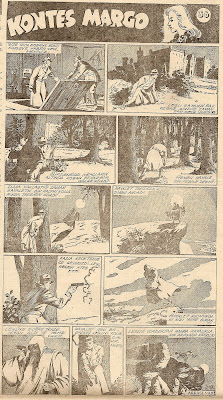 The Turkish edition in 1001 Roman is a flawed reprint unfortunately. Some sequences during the flashback appear to be abridged with a few pages completely redrawn ineptly for some reason. Furthermore, roughly halfway through the story, the format changes from full page (as in the first scan at the top of this blog) to 2/3rds of a page with standartly neat row/panel design (as in the above scan) at the expense of the free-style layout of the earlier pages.
Prior to its run at 1001 Roman, 'Grofica Margo' had also been reprinted in the French comics magazine Gavroche (no. 13-54) in 1941 in a colorized edition which foregoes the subtleties of the original black&white art.
'Kontes Margo' was followed in 1001 Roman by yet another Kuznjecov comics, but that will be covered in the next post in this blog, so stay tuned on...
Posted by Kaya Özkaracalar at 1:38 PM 1 comment: 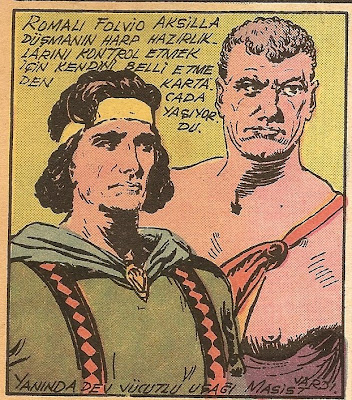 Maciste is the most prominent hero of Italian popular cinema and also probably the oldest recurring character in world cinema. He was featured in a long-running series of Italian films from mid-1910s to late 1920s in the era of silent cinema and was revived in Italy in the 1960s with more than a dozen further Maciste films in the first half of the decade (Since most of the 1960s movies were re-named as Hercules movies when released in the US, he is not as well known in the English-speaking lands).
Maciste had actually made his first appearance as a side character (and a black-skinned one) in the seminal Italian silent film Cabiria (1914) before rising to hero status in the follow-up series. Cabiria tells the story of the misfortunes of a Roman maiden, the title heroine, abducted to Cartagha. Maciste is the side-kick of the hero who rescues her from ritual sacrifice.
A comics adaptation of Cabiria, co-illustrated by Raffaele Paparella and Antonio Canale, was serialized in the Italian weekly comics magazine Topolino no.'s 527-554 in 1943 which was later reprinted in Turkish comics weekly 1001 Roman in 1945-46 (no.'s 306-337) under the title 'Kabria'. The above panel (all scans in this post are from the Turkish edition) is the first appearance of Maciste (spelled as 'Masist') in this comics adaptation. The plot synopsises of Cabiria refer to Maciste as the lead protagonist's slave, but the Turkish text refers to him as his servant. Below is another panel with Maciste, breaking his chains a la Hercules: 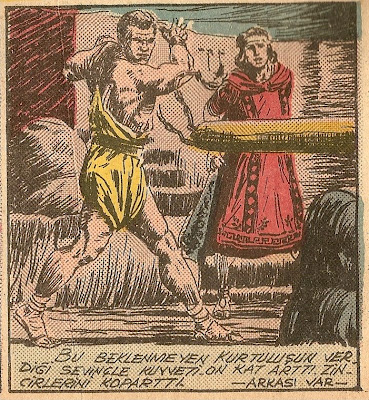 The comics appear to be a pretty faithful adaptation of the movie, as witnessed in the below panel and its corresponding still from the movie: 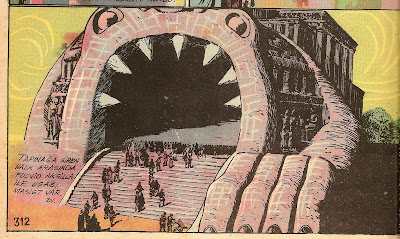 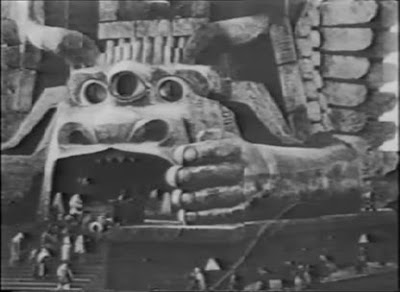 Below is another impressive panel, depicting the march of Hannibal's war elephants, reprising another scene reportedly in the film ('though I couldn't find any stills of it on the net): 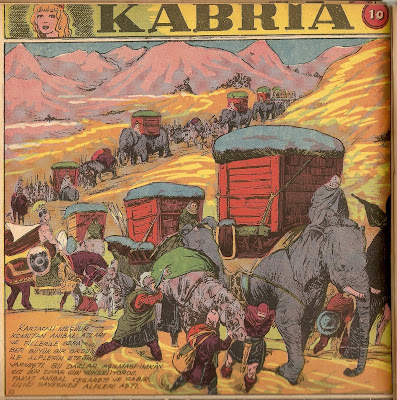 UPDATE: Armando Botto from Italy kindly informs that the Turkish edition in 1001 Roman has been re-colored as the original Italian edition in Topolino was in black and magenta; he also adds that some panels in 1001 Roman have been re-formatted together with some other changes such as "while your "temple" panel is just a part of the original one, the"elephants" one has had some details added (part of the mountains in the background,and also a few elephants)." Thank you once again, Armando..
Posted by Kaya Özkaracalar at 3:23 PM 1 comment: