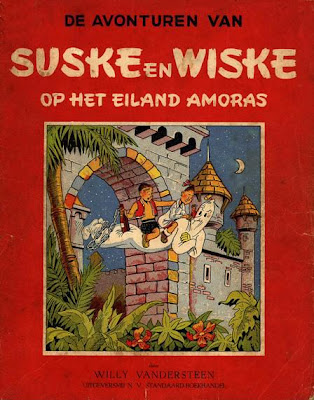 'Suske en Wiske' is a Dutch-language newspaper comics serial from Belgium which had debutted in 1945 and still being run in its home country after more than half a century. The strip, created by Willy Vandersteen (1913-1990), had started on March 30th, 1945 (*) in De Nieuwe Standaard initially as 'Rikki en Wiske', chronicling the adventures of a teenage girl (Wiske) and her brother (Rikki). With the second episode ('Op het eiland Amoras') however, which started on Dec. 19th, 1945, Rikki disappeared and Wiske was joined by a male orphan named Suske and the series was re-titled accordingly. With the next episode ('De sprietatoom'), the teenage duo would be joined by the bald grown-up Lambik, a plummer by profession, who would eventually become the real attraction of the series. The strip would be popular enough to be reprinted in album format from 1946 onwards.
In 1948, Hergé, the creater of Tintin, who had launced a weekly comics magazine headlining his character, invited Vandersteen on board for its Dutch-language edition titled Kuifje. From 1950 onwards, Suske & Wiske also began to be serialized in the French-language edition (Tintin) retitled as 'Bob et Bobette'. French-language albums under this title began to be published in 1951. A total of eight 'Suske en Wiske' / 'Bob et Bobette' adventures were serialized in Kuife / Tintin till 1959. The adventures originally published in Kuife / Tintin were reprinted in albums of blue covers, distinct from newspaper strip reprint albums with red covers.
In the early 1970s, Vandersteen would hand over the strip to his assistant Paul Geertz, who ghosted for the creater until 1989 when he finaly began to be officially credited. Geertz handled the series until his retirement in 2001.
Sparodic English-language album editions of Suske en Wiske / Bob et Bobette have been published since 1976 as Willy and Wanda (US), Bob & Bobette (UK) and more recently as Spike and Suzy. For a complete list, see http://suskeenwiske.ophetwww.net/albums/engels/index-eng.php
(*) after Belgium had been liberated from the Nazi occupation, but several weeks before the war in Europe ended with the ultimate defeat and final surrender of Nazi Germany, thus making it a war-time comics, hence its inclusion in this blog
Source: http://suskeenwiske.ophetwww.net/
Coming soon in this blog:
THE TURKISH EDITIONS OF SUSKE EN WISKE / BOB ET BOBETTE 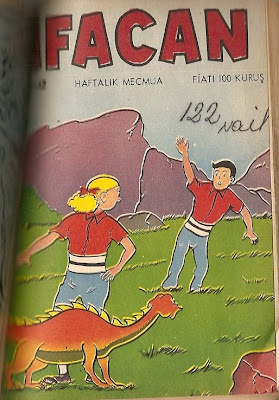 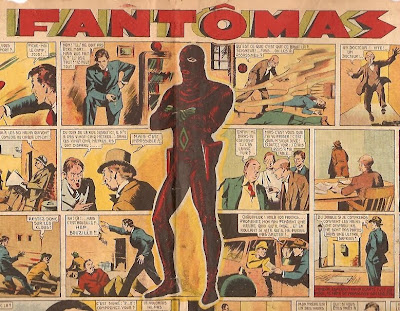 Historically speaking, the most important comics serialized in the wartime French comics weekly Gavroche was 'Fantômas', the first-ever comics featuring the phenomenally popular pulp fiction anti-hero of the same name which was created by French writers Marcel Allain (1885-1970) and Pierre Souvestre (1874-1914) in 1911. Between 1911-13, the duo had penned a staggering amount of 32 Fantômas novels, several of which were adapted to the screen in a series of equally succesful movies between 1913-14. In 1926, Allain would revive the character in a news series of books (Souvestre had died in 1914). Hence, the 'Fantômas' comics which kicked off in the central color pages of no. 24 (dated April 10th, 1941) of Gavroche carries a "Marcel Allain presénte" tag.
Below is the scan of the bottom two rows of the first page where Fantômas makes his first appearance (apart from the extra-panel centerfold figure seen in the above scan) in the comics as he dramatically bursts from behind a wall clock (*):

The first installement of 'Fantomas' covered both of the two central color pages: 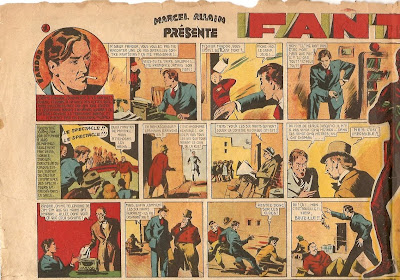 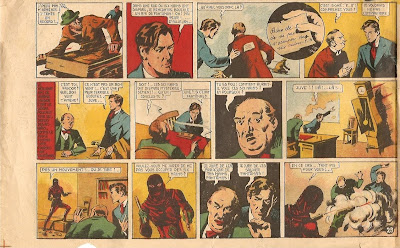 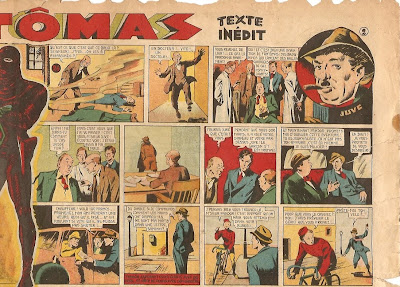 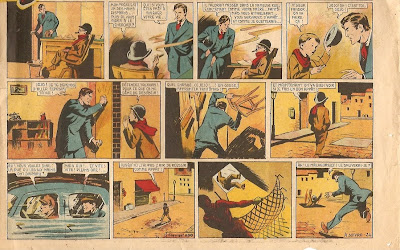 'Fantômas' lasted till no. 30 (dated May 22d, 1941) of Gavroche and the rest of the installements beyond the first one were apparently single-page per issue, so there are a total of 8 pages. The original art work for one of the pages (**) can be seen here:
http://www.comicartfans.com/gallerypiece.asp?piece=627395&gsub=110317
and thumbnails of all the pages and zooms of sample panels can be viewed here:
http://www.premiumwanadoo.com/fantomasfr/Fant300.htm
The last panel of the last installement promised a new episode titled 'Fantômas et l'enfer sous-marin [Fantomas and the underwater hell]' which was never published, presumably due to censorship.
I can't see any signatures either in the Fantômas pages of no. 24 of Gavroche which I have in my collection nor in the original art available online, but most French sources credit the art to Mat and Tori. The latter is the pen-name of Spanish-born artist Antoni Clavé (1913-2005). He was a distinguished painter in Spain who had to flee to France after the Spanish Civil War was won by the fascists. In France, he initially took up a temporary career in comics as he is known to have worked for comics weeklies Jumbo, Gavroche and Les grandes adventures. In this medium, besides 'Fantômas', he is notable for making the first comics version of Zorro in a series of albums from the Victorie collection published in Lyons, in the unoccupied regions of France, circa 1941. After the war, Clavé appears to have abandoned comics work in favor of painting and sculpture, even opening a joint exhibition with Picasso in 1946!
The identity of Mat, Tori's companion in 'Fantômas', is less clear-cut. It is tempting to identify him as the leading French comics artist Marcel Turlin (1895-1982) who used Mat as his penname. However, an online French comics dbase, la database BD du Loup, notes that Spanish emigre artist Martí Bas (1910-66) has also used the penname Mat in Gavroche. Bas, an illustrator who had produced propaganda posters for the Communist-led Republican government during the Spanish Civil War, was indeed a companion of Clavé even back in Spain where they had collaborated in stage set designs in Barcelona.
Footnotes:
(*) In a somewhat similar fashion, a female vampire appears from inside a wall clock in the French erotic horror film Les frisson des vampires (1970), directed by Jean Rollin. That scene might have been influenced by this sequence from the Fantômas comics as director Rollin was known to be a comics fan as well as part of the French surrealist circles which adored Fantômas.
(**) While the original art work of this 5th page was intended for publication in no. 28, as the pencilled note indicates, it has apparently turned out in no. 27 as no. 24 carried two pages.
Posted by Kaya Özkaracalar at 12:00 AM 1 comment: