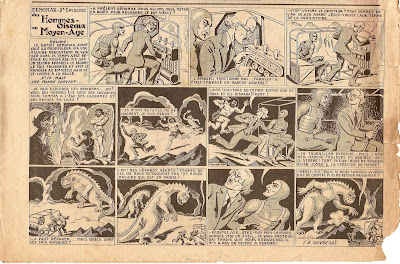 Perhaps the most interesting comics series in the wartime French comics weekly Gavroche were 'Le clan des hommes oiseaux [The Clan of Bird-Men]' and its follow-up 'Les Hommes oiseaux au moyen-âge [The Bird-Men in the Middle Ages]', featuring the anti-hero Demonax, one of the earliest, perhaps the earliest anti-hero in the comics medium.
The Clan of the Bird-Men, which debutted in no. 13 (dated Jan 23rd, 1941), were a gang of masked and costumed villains with mechanical wings, led by Demonax. The second episode, which kicked off in no. 29, involves a time machine which takes the characters first to the Middle Ages, and then to the pre-historic ages, as can be seen in the above scan of the installement from no. 42 (dated August 14th, 1941). The saga ended in the next issue, which is unfortunately not available in my collection.
The original artwork of one of the earlier installements can be seen here:
http://www.comicartfans.com/GalleryPiece.asp?Piece=506191&GSub=79782 .
The series is signed by Lortac, the pen-name of the multi-talented Robert Collard (1884-1973). While his parents had intended a military career for him, Robert Collard was expelled from the French Military Academy at the age of 16 for lack of discipline. Instead, he attented painting workshops at Paris Fine Arts School and began working as an illustrator & caricaturist at newspapers in 1906. He was drafted for the 1st World War, but was discharged when he was wounded. Eventually, Collard took up an interest in animation and became one of the pioneers of this then-novel craft in France. He also penned several sci-fi and crime novels.
Demonax was Collard's first comics work. In the following years, he gave up comics art work, but became a prolific script-writer for comics. His ouvre in this category include the long-running outer space adventure comics 'Les conquerants de l'espace' serialized in Meteor between 1953-64, as well as several episodes, mostly of fantasy variety, of 'Bibi Fricotin' between 1948-69.
Main source on Lortac bio: http://www.bd-nostalgie.org/DIVERS/02_auteurs_Lortac.htm
For a detailed study of his animation work, see: http://www.pathefilm.freeserve.co.uk/95flmart/95lortac.htm
Posted by Kaya Özkaracalar at 12:00 AM No comments: 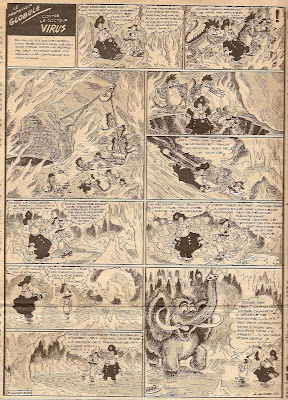 'Le professeur Globule contre le docteur Virus' was one of the fantastique oriented comics published in the war-time French comics weekly Gavroche. It debutted in no. 12 and lasted till the last issue (no. 66); the above scan is from no. 42 (dated Aug. 14th, 1941). The series was signed by Erik, the pseudonym of French comics writer and artist André-René Jolly (1912-74).
Gavroche was being published in Paris which was under German occupation and the Nazi occupation authorities were controlling the distribution of paper, which was in short supply due to war conditions, in favor of pro-Nazi publications. In 1942, Gavroche had to close shop together with several other French comics weeklies due to paper scarcity. Next year, a new comics magazine titled Le Téméraire emerged to fill the void with the support of the Nazis. André-René Jolly joined the team of this Nazi propaganda vehicle and introduced a 'new' comics series very similar to his earlier Prof. Globule vs Dr. Virus one titled as 'Le docteur Fulminate et le professeur Vorax'. One significant change was the fact that the antagonist in this new series was portrayed as a Jew...
Source of the info on Le Téméraire: 'Un illustré sous l’occupation' by Gilles Ragache
Posted by Kaya Özkaracalar at 1:00 AM No comments: 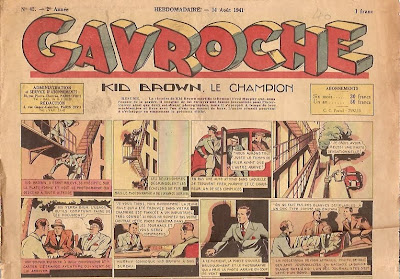 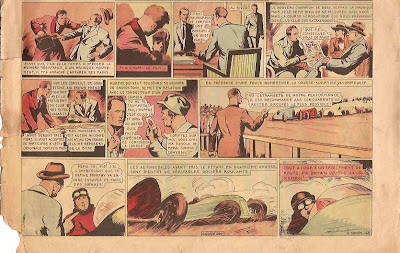 Beginning today, I will start covering some French-made comics published in the war-time era French comics magazine Gavroche for the next few posts. Gavroche was put out by Editions Renaudot in occupied Paris and lasted for 66 issues between 1940-42, that is in the early years of the Nazi occupation. It was one of the new comics publications which had sprang to fill the void when most of the major comics weeklies (such as Journal de Mickey) with American connection had re-located to the unoccupied southern coast of the country. It was non-political, neither pro-Resistance nor pro-Occupation.
Above scan is from no. 42 (dated Aug. 14th, 1941). The comics on this first page, 'Kid Brown, le champion', features a boxing hero. It was serialized in issues no. 31 thru no. 48. The art is by Niezab ([Gaston Niezabytowski] 1866-1955), who, after a stint at the Paris Opera as a decorator, had taken up a career initially as a magazine illustrator and then, beginning in the 1930s, as a comics artist. After 'Kid Brown' ended, another work of Niezab titled as "Criquet, gamin de Paris" started in Gavroche.
Judging by the above sample, 'Kid Brown' appears to be a rather mediocre work, but the other comics from Gavroche which I will cover in the coming posts are far more interesting, so stay tuned on..
Posted by Kaya Özkaracalar at 7:33 AM No comments: 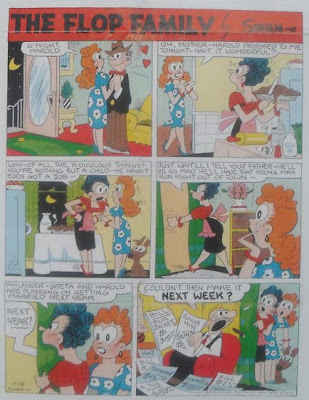 'The Flop Family' is an American newspaper humour strip, featuring a middle-class family, by artist George Swanson (1897-1981, who signed the strip as "Swan") which had debutted in 1943 and was in syndication till the death of its creator. It's in the tradition of 'Bringing Up Father' and 'Blondie', but I personally find its art more alluring then both of its better-known precedents. I might be wrong, but as far as I know it has never been reprinted in any compilation. The above sample of a Sunday is from a preprint from 1950, which is currently being on ebay.
It had debutted in Turkey in 1954 in the daily newspaper Milliyet, retitled as 'Allahlık Ali Bey'. Below image is from Oct 1st from that year:

I recall that 'Allahlık Ali Bey' was still being run in Turkish newspapers in my childhood, that is 1970s. In 1982, it was revived in the multilingual magazine Hello aimed at teaching English. In the same decade, it was also ran in the comics supplement of the Bulvar newspaper.
Posted by Kaya Özkaracalar at 1:00 AM No comments: