In this post, I will cover two orientalist adventure comics serialized in Britain's Mickey Mouse Weekly. 'Gordon Gale - Air Rover' by British artist Stephan Chapman began in no. 43, dated Nov. 28th, 1936. It tells the story of the title hero, a pilot-mechanic who has invented a special type of plane called Hydro-Gyro. In its first full-fledged test flight, he is accompanied by a young woman who is desperate to deliver some papers to her uncle in Africa. First half of the story takes place in Morocco where the protagonists are assaulted by Arabs: 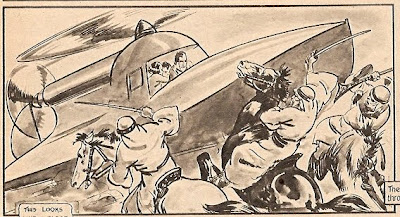 Morocco was under French occupation at the time, and several textual references to the Arabs as "rebels" testify to the colonialist stand of the comics. Furthermore, in one instance, the Arabs are also humiliated for lacking the know-how of the westerners: 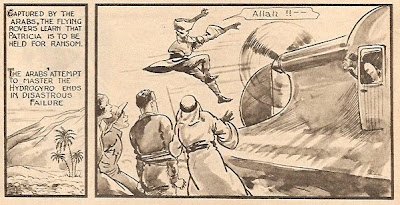 The second half of the story takes place in tropical Africa, with appropriate jungle perils:

The comics ends with the protagonists getting hold of a treasure and becoming wealthy, ie. by looting Africa... 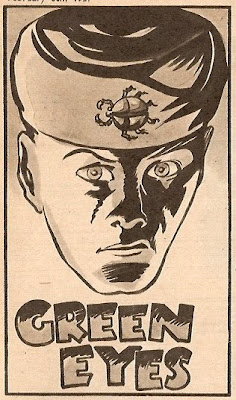 'Green Eyes', by an unknown author and whose plot is apparently inspired from the Hollywood film The Mask of Fu Manchu (1932), tells the story of the title villain's attempt to get hold of four scarabs (all in London, but apparently brought to the UK from the Orient, ie. stolen in the first place!) which will somehow give him authority over certain "tribes" in Egypt (under British occupation at the time). Admittedly, this comics features several visuals with delicious imagery: 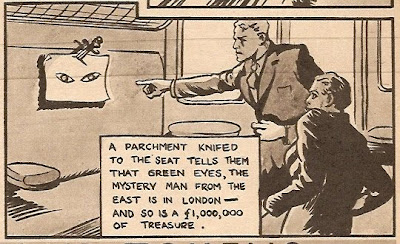 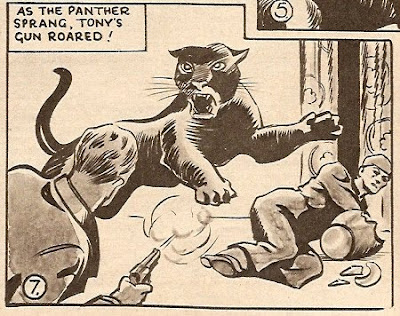 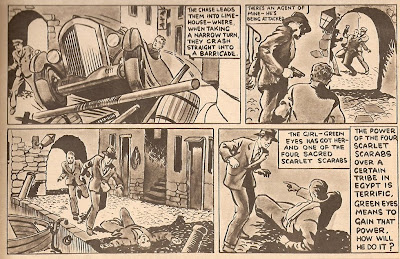 In the end, Green Eyes manages to get the scarabs back to Egypt, but secret service agents trail him: 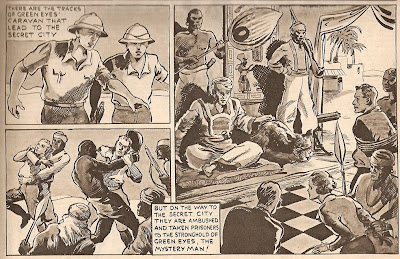 It all ends happily -for the westerners, of course, and not for the Egyptians..
If anyone knows the artist of 'Green Eyes', please let us know.
Both 'Gordon Gale - Air Rover' and 'Green Eyes' were also serialized in the Turkish children's magazine Çocuk Sesi. The former was re-titled as 'Havalar Kahramanı Bay Metin', with the protagonist given the Turkish name Bay Metin! It started in no. 366, dated Dec. 28, 1936, only one month after its original debut in MMW.
Posted by Kaya Özkaracalar at 3:03 PM 2 comments: 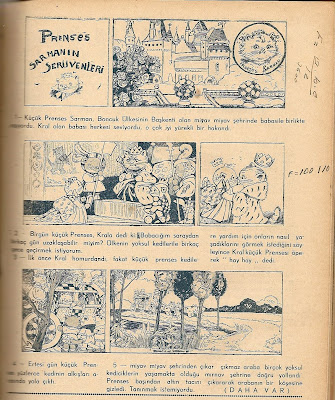 'The Pussycat Princess', created by Grace Drayton (1877-1936), one of the first female comics artists in the world, was serialized in the Turkish children's magazine Çocuk Sesi in 1936 under the title 'Prenses Sarmanın Serüvenleri' [The Adventures of Princess Sarman (a popular Turkish name given to cats)]. The above scan is of the first installement of the series published in no. 335, dated May 25th, 1936. With the next installement in the subsequent issue, the comics began to be reprinted in proper format without the superflous texts beneath the panels: 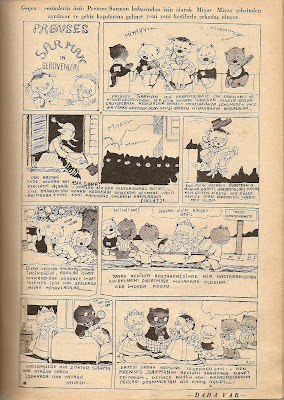 Drayton would unfortunately die of a heart attack in 1936, a year after she started 'the Pussycat Princess' which would be continued by other artists. The comics serialized in Çocuk Sesi date originally from 1935 and are by Drayton herself.
Drayton's 'Pussycat Princess' was also ran in Italy's I tre porcellini comics magazine in 1935.
Posted by Kaya Özkaracalar at 4:09 PM 2 comments:

An obscure children's adventure comics with fantasy elements was serialized in the Turkish children's magazine Çocuk Sesi between 1935-36. Titled as 'Yamanla Duman' [Yaman and Duman], it told of the adventures of two teenage kids, initially accompanied by their parrot (which seems to have disappeared in the later episodes).
The series began its run in no. 274, dated March 25th, 1935, with a typical orientalist (good whites versus bad Arabs) episode, admittedly with some mystery trappings. A train has simply vanished in the forests of Egypt and the two kids named Yaman and Duman boldly set out to solve the mystery. Below are scans of the first two pages: 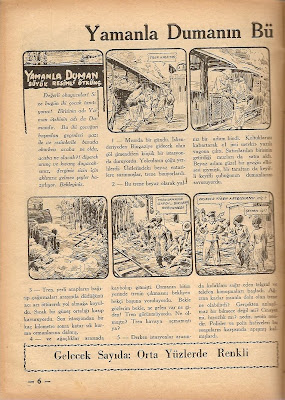 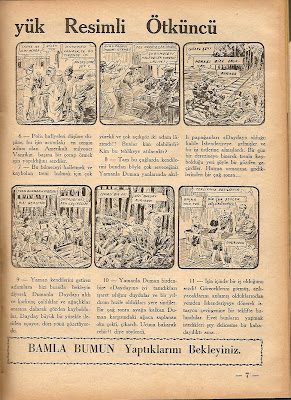 Fantasy elements first begin to emerge with the appearance of two giant birds during the interim between the first and the second episodes:

Next, the kids come across a land of midgets whom they befriend:

After which they encounter a colony of ancient Egyptians:

The subsequent adventure kicks off with the kids being captured by what appears to be a giant octopus..

..which turns out to be a mechanical submarine in reality. The boys are taken to an enclave beneath the waters in which they encounter an evil robot!

Further adventures entail a return to the colony of ancient Egyptians where they are mummified to buried alive after the death of the phorah, encounter with giants, with cannibals et al... The run of the strips ends with no. 345, dated Aug. 3rd, 1936.
If anyone knows about the original source of this interesting comics, please let us know..
Posted by Kaya Özkaracalar at 7:54 AM No comments: 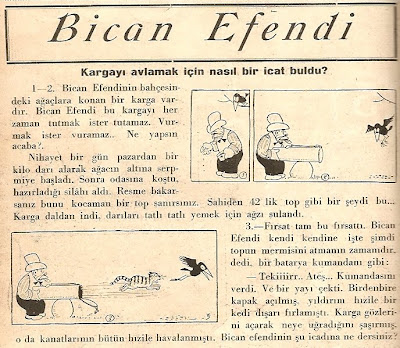 The Swedish gag-strip 'Adamson', featuring a cigar-smoking middle-aged man and created by Oscar Jacobson (1889-1945), was ran in the Turkish children's magazine Çocuk Sesi between 1934-36. The Turkish edition was initially titled as 'Bican Efendi', probably in an allusion to the Turkish short comedy film series from 1921 with the same name. However, the title was soon changed into 'Bican Aktüre' with the hero given a 'proper' a surname, in keeping with the government's modernization reforms which entailed introduction of surnames in Turkey!
As seen in the above scan (from no. 252, dated Oct. 22nd, 1934), the strip was accompanied with extensive extra-panel texts in the Turkish editions.
Adamson was reportedly syndicated in several other countries the throughout world.
Posted by Kaya Özkaracalar at 3:47 PM No comments:

DEBUT OF MANDRAKE THE MAGICIAN COMICS IN TURKEY

Mandrake the Magician's Turkish debut came in 1935, less than a year after the strip's debut in the US. A weekly actuality magazine titled Büyük Gazete began to serialize Mandrake in its back covers beginning with its no. 30 on 13.5.1935. This makes Mandrake's Turkish debut one of the earliest known appearance of this hero outside newspapers anywhere in the world.
Below are scans of the beginning of Mandrake's first-ever adventure from its Turkish edition in Büyük Gazete, featuring the first-ever appearances of not only Mandrake and Lothar, but also of their arch-nemesis Cobra. 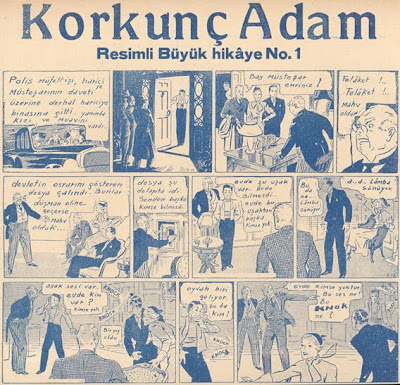 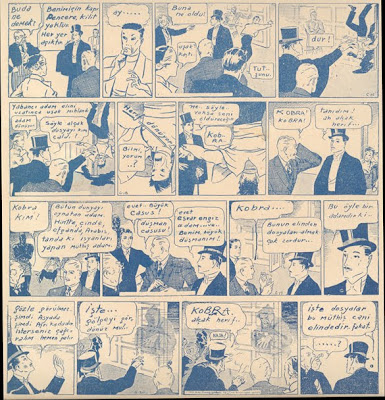 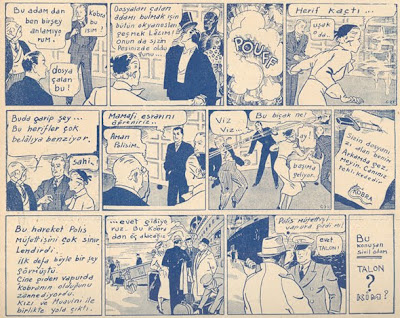 Note that the last two rows (dailies) feature the signature of artist Phil Davis; it has widely been reported that creator-writer Lee Falk was largely responsible for drawing the first few dailies before Davis took over drawing.
Posted by Kaya Özkaracalar at 2:21 AM 4 comments:

I've just realized that the 'Bobby & Chip' gag-a-week strip from Britain's Mickey Mouse Weekly (actually a British re-titling of Otto Messner's 'Bobby Dazzler') was also ran in the Turkish children's magazine Afacan in 1939. Re-titled as 'Hop ile Top', it debutted in the bottom third of the reverse side of the front cover of no. 221, dated Feb. 9th, 1939 (above scan). It turned into monochrome from no. 235 onwards and lasted till no. 249. Afacan had also ran some British-made Disney comics from MMW as well.
Posted by Kaya Özkaracalar at 12:59 PM No comments: 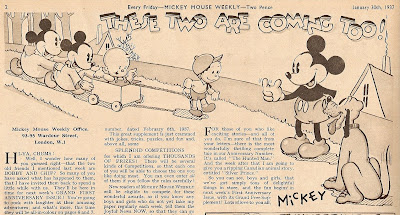 As noted in an earlier post in this blog on Oct. 31st, the gag strip 'Bobby & Chip' (actually a British re-titling of Otto Messner's 'Bobby Dazzler') which had been running in Britain's Mickey Mouse Weekly since its inception was discontinued after no. 27, but resumed early in 1937. Its resumption was first heralded in no. 51's editorial page with the announcement that in the magazine's anniversary issue two weeks from then, "two old friends are coming on a visit to pages 6 and 7, laden with laughter." This news was made more explicit in the editorial of no. 52 with the 'two old friends' disclosed as Bobby and Chip, accompanied with the above illustration, whose artist is unknown. 'Bobby & Chip' would indeed resume in no. 53.
Posted by Kaya Özkaracalar at 5:43 AM No comments:

'BOBBY & CHIP' IN THE US COMICS 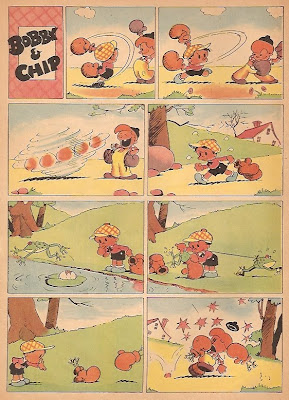 I've recently realized that the 'Bobby & Chip' gag comics, featured in Britain's Mickey Mouse Weekly for several years since its inception in 1936, had also been published in some US comics, including Mickey Mouse Magazine. The above scan is from vol. 4 no. 1 (Oct. 1938) of MMM, reprinting a 'Boby & Chip' gag from no. 15 (May 16th, 1936) of MMW (note that the above American reprint edition is missing the second panel of the original UK edition):

In the same year, 'Bobby & Chip' was also reportedly published in the no. 1 of a US publication titled Nickel Comics from Dell Publishing.
UPDATE FROM JUNE 18TH, 2011: As blog reader fortunato has noted in his comment appended to this post on May 4th, 2010, 'Bobby & Chip' is indeed a British re-titling of Otto Messner's 'Bobby Dazzler', the topper of Messner's Felix. I've recently even come across (in http://itsthecat.com/blog/) the original source of the 'Bobby & Chip' strips referred to in this post, the 'Bobby Dazzler' strip from Apr. 12, 1936: 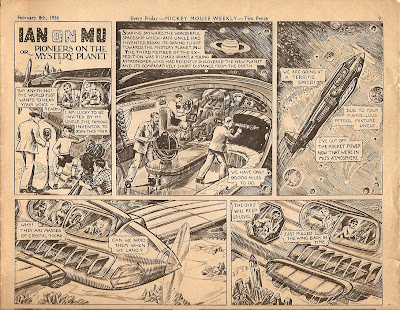 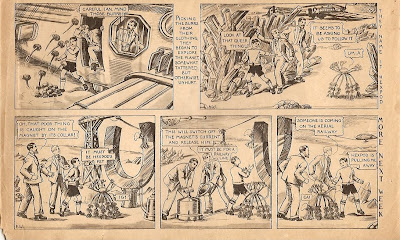 Apart from gag comics, the non-Disneyic material in Britain's Mickey Mouse Magazine also included serious adventure comics. These consisted, on one had, of reprints of American Sunday newspaper comics in the color central pages, and, on the other, black&white comics by mostly British artists. Pioneer British newspaper comics artist Hugh Stanley White (1904-84) was responsible for most of the latter material in the early issues. The first issue of MMW, dated Feb. 8th, 1936, featured two comics by White: the full-page 'Ian on Mu' and the three-row 'Ginger Nick the Whaler'.
'Ian on Mu' is referred to as Britain's first science-fiction comics by online comics encyclopedia Lambiek. As can be seen in the above scan from its first installement at no.1, it tells the story of an expedition to a mysterious planet. Nevertheless, apart from the appearance of some robots, full-fledged sci-fi elements do not really bloom in its 15-issues run. The expedion discovers a Chinese (!) colony on this planet and sets out to rescue its imprisoned princess from rouge elements.
'Ginger Nick the Whaler', on the other hand, is more mundane and lasted for only 11 issues. 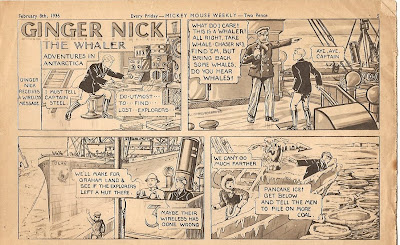