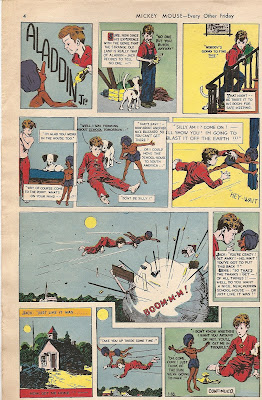 One of the non-Disneyic comics ran in Britain's Mickey Mouse comics magazine in the wartime era was 'Aladdin Jr.', chronicling the humorous exploits of a magic lamp genie accompanying a boy. 'Aladdin Junior' or alternatively 'Aladdin Jr' was an American import, a King Features Sunday newspaper comics written by Les Forgrave and drawn by William M. Prince. It had been syndicated in the US in 1942-43. According to Andy Madura's 'Comics and Paper Collectibles' site, "the story of the strip revolved around a young lad named Jack who was living the country life with his Aunt Belle and Uncle Pete. One day, his aunt breaks down and gives Jack a crate that his father had bequeathed to him. Inside was an arabian lamp, and when he rubbed the lamp a very mischevious Genie popped into Jack's life." The above scan is from MM no. 331 (dated March 13th, 1943) and the below ones from no. 358 (dated March 25th, 1944) and no. 371 (dated Sept. 23rd, 1944): 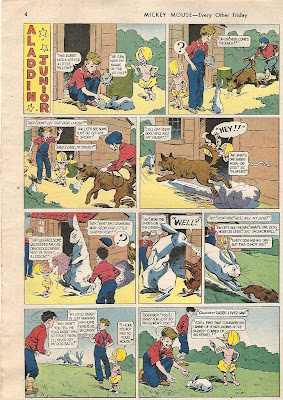 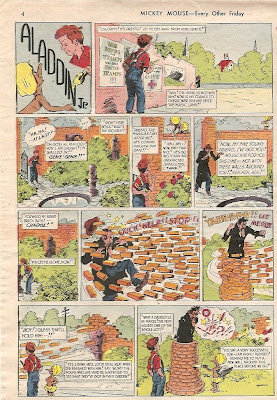 Posted by Kaya Özkaracalar at 1:38 PM No comments: