Above scans are from the central pages of the no. 1653 (dated Jan. 14th, 1922) and no. 1656 (dated Feb. 4th, 1922) of the British comics magazine Comic Cuts, featuring the strip 'Pussyfoot the Redskin' by an unknown artist. It is the earliest comic strip that I've come across which headlines an American native and while the character's name might not sound flattering, it is noteworthy that he outwits the whites with his intelligence in these two samples. I cannot find any info on this interesting strip, so if anyone knows anything about it, please let us know.
Posted by Kaya Özkaracalar at 12:01 AM No comments: 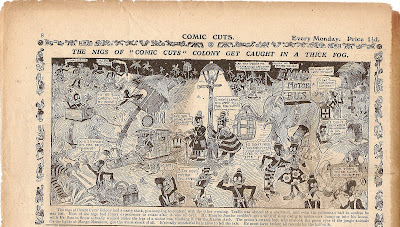 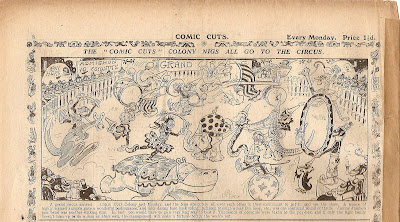 According to Denis Gifford (The International Book of Comics, W H Smith Exclusive Books, London: 1988), the Comic Cuts Colony had debuted in 1894 and was created by one Frank Wilkinson, about whom I cannot find any info anywhere. While I am admittedly reluctant to speak positively about it, the art is quite high-calibre and the humour is nowhere as repugnant as similar fare from most other racial-stereotying comics.
Posted by Kaya Özkaracalar at 12:01 AM No comments: 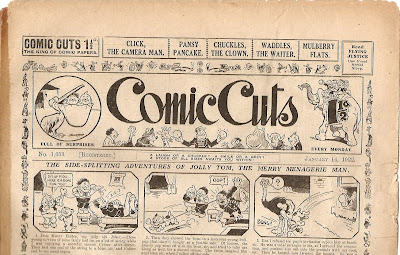 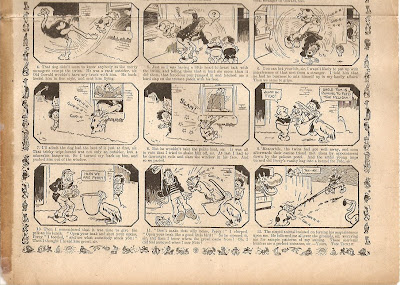 Recently, I had a chance to get two 1922 issues of Britain's pioneering comics magazine Comic Cuts from ebay (for an amazingly low price of app. 1 pounds each!). Comic Cuts, the first magazine to use the word "comic" in its title, was started by Alfred Harmswoth in 1890, and priced at 1/2 penny, half the price of similar magazines like Funny Folks, kicked off the boom of comics magazines in Britain. Above scan is of the cover of no. 1653 (dated Jan. 14th, 1922), featuring 'The Side-Splitting Adventures of Jolly Tom, the Merry Menagerie Man' by British comics artist Percy Cocking (1881-1964) who had been drawing the exploits of Tom in Comic Cuts since 1910. I find his art quite pleasing and high-calibre 'though the title character's twin nemesises are clearly modeled on Katzenjammer Kids. The back cover of this issue includes another strip by Cocking:

This strip is highly innovative in its utilization of the depiction of each flat as if a panel within the panels. Cocking's Mulberry Flattites had debutted in Comic Cuts in 1906. Cocking, a staffer for Harmsworth's Amalgamated Press (today's Fleetway), is better known as the artist who took over the hugely popular series 'Weary Willie and Tired Tim' created by the highly influential Tom Browne in 1896 for Illustrated Chips and continued it for more than four decades till the magazine folded in 1953.
Posted by Kaya Özkaracalar at 4:03 PM No comments: