The world-wide release of Holywood's new The Lone Ranger movie, which I enjoyed a lot, by the way, earlier this summer rekindled my interest in this American pop icon﻿. Years ago, I'd read some of the pre-war Lone Ranger strips in their Turkish editions available in my collection, but this time I went looking for beyond what's in my hand.
The Lone Ranger had not originated in comics, but in radio. 'The Lone Ranger' radio serial, chronicleing the adventures of a masked justice fighter and his native American side-kick, had began in 1933 and lasted for more than two decades was scripted by radio script-writer Fran Striker. In 1938, the characters were brought to the screen in the form of a serial. The Lone Ranger comics kicked off later in the same year, the color Sunday half-pages on Sept. 11 and the daily strip the next day.
Initially, the artist on both the Sundays and the dailies was Ed Kressy, an illustrator without much experience in comics art. Below is the earliest Lone Ranger Sunday I could find on the net (*), dated Oct. 2nd, that is the fourth Lone Ranger Sunday: 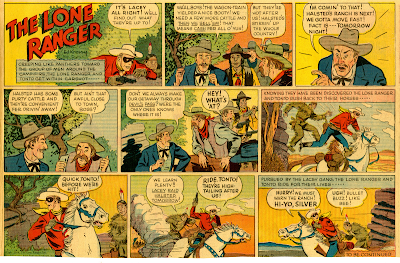 I don't think the art of Kressy, at least in the Sundays, is as bad as fans writing on the issue make of it, but it sure leans somewhat towards the caricaturish, esp. compared to his successors. The large eye-holes in the mask and the eye-pupils always visible therein are not welcomed by fans either and don't look very 'cool' indeed. However, his successors would not immediately get rid of those darn eye-pupils, either.
Kressy's stint on the Lone Ranger comics would not last long. The sparse writings on the issue note that he was initially replaced by John Blummer, at least in the Sundays. The last Sunday credited in the logo to Ed Kressy is from March 5th, 1939. Blummer is never credited in any way in the subsequent Sundays. However, the art had noticably changed (even though the eye-pupils remain) in the last Sundays still credited to Kressy, as can be seen in the final Sunday credited to Kressy: 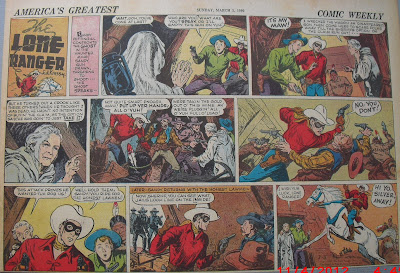 Unless Kressy had changed his style radically, these last Sundays credited to him must actually be the work of someone else, presumably Blummer.
From March 12th onwards, the Sundays are credited on the logo to Fran Striker, the original writer of the radio serial and the first three such Sundays do not feature any signature inside the panels either. However, with the official elimination of the Kressy credit, the art has once again changed, for the better. From April 2nd onwards, the signature of the famed Charles Flanders begins to appear inside the panels. Why Flanders did not sign (or, perhaps, wasn't allowed to sign) the three Sundays before that is unknown to me. Note that even Flanders has kept those pupils visible on the eyes of the Lone Ranger in his early work, as in the below Sunday from April 9th: 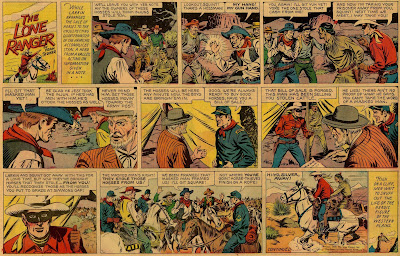 The next post on this blog is planned to be on the earliest Lone Ranger dailies (drawing from my near-complete collection of their British editions), so check back here if you are interested.
(*) The images in this post are of vintage clippings put on sale on ebay.﻿

SPECULATION FOR A POSSIBLE PRE-WAR INSPIRATION FOR THE SMURFS? 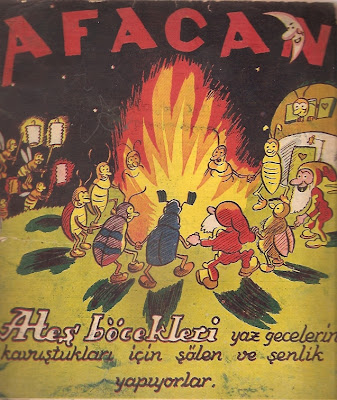 The above is a (slightly cropped, due to the size of my scanner) scan of the cover illustration of the no. 34, dated July 11, 1935, of the Turkish weekly children's magazine Afacan. These tiny dwarfs appear in several covers of Afacan between 1934-36. Most of the graphic material in these early issues of the magazine appear to originate from French sources, so there is a good chance that these illustrations might also be of French origin. If indeed so, perhaps Peyo (born in 1928) might have seen them in his early childhood?.. Of course, dwarves are a part of the European mythology/folklore and Peyo does not need to see these particular renditions to conceive of the smurfs, but if he had indeed seen them?..
If anyone can identify the original publication where these characters had first appeared, PLEASE let us know...
Posted by Kaya Özkaracalar at 3:15 PM 2 comments:

New Blog on The Smurfs

OK, I have neglected blogging for quite a while, sorry. Promise I will use this summer vacation to post again here asap. Meanwhile, I've already started a new blog on the Smurfs, begining with a post on their debut in 1958:
http://kayaozkaracalar4.blogspot.com/
It's not pre-war, but somewhat vintage anyway, so perhaps some of you might be interested in..
Posted by Kaya Özkaracalar at 2:22 PM 2 comments: