DEBUT OF BRINGING UP FATHER IN TURKEY (1925) 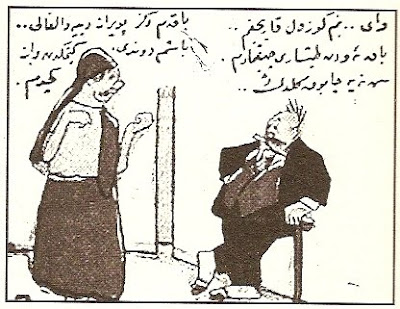 Esin Bayraktar provides a detailed coverage of the very interesting debut of 'Bringing Up Father' in Turkey in her article 'Seni Bir Yerlerden Gözümüz Isırıyor Bican Efendi...' in Serüven [2nd series], no. 1 (Winter 2006), pp. 41-45. The scan and the info in this post are from that article.
'Bringing Up Father' debutted as 'Bican Efendi' in no. 1, dated May 28th, 1925, of Resimli Perşembe weekly and was published in its first eight issues. As can be seen in the above scan, a moustache was added to the face of Jiggs and, furthermore, the characters were depicted in traditional Turkish dresses of the time. Five of the eight installements carry the abbreviated signature "İ"; however, the identity of the artist in question is unknown. Bayraktar speculates that the installements with the İ signature might have been Turkish productions while the rest are modified versions of original American sources.
The name Bican Efendi comes from the title of a Turkish comedy film series.
Beginning with 1950s, licensed and faithful reprints of 'Bringing Up Father' would be published in the Hürriyet daily newspaper as 'Güngörmüşler'.
Posted by Kaya Özkaracalar at 2:26 PM No comments: 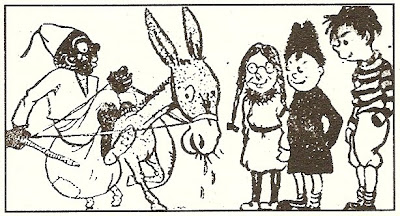 Currently available research so far indicates that the earliest continuity comics published in Turkey had appeared in a periodical titled Resimli Mecmua in 1925-26. Hülya Eraslan, in her article 'Resimli Tefrika: Acar'ın Sergüzeştleri ve Abbas Yolcu' published in the now-defunct (but much missed!) comics research journal Serüven [2nd series], no. 1 (Winter 2006), pp. 46-49, had covered the comics published in Resimli Mecmua at length. All the info and the scans in this post come from that article:
The first six issues of Resimli Mecmua serialized 'Acar'ın Sergüzeştleri [The Adventures of Acar]', chronicling the globe-trotting adventures of a Turkish character named Acar. The first four installements credit the script to Abdullah Ziya, a famous Turkish writer of popular fiction, better known in the later decades as Abdullah Ziya Kozanoğlu, who would create the trend-setting Turkish swashbuckling comics hero Kaan (later re-named as Karaoğlan) in the 1950s. In these four episodes, Acar is a mischievous kid who is sent by his father to work in a ship. There, he befriends a Chinese and a black kid ad together they go to the poles.
The art and the content drastically change in the fifth and the sixth installements where Acar is now a youngster who solves a murder mystery in Paris.

'Abbas Yolcu [Abbas On the Road]' starts at no. 26 and continues for 18 issues. It starts with the house of a rich guy named Abbas being flooded and the character washed over to the sea in his bed where he is picked up by a ship:

Abbas' adventures take him first to a deserted island, then to the poles. Eventually, he becomes a film star on the strength of his newly gained fame as a globe-trotting adventurer. The saga ends in Paris, where he had already bought a house before embarking on his journey.
If anyone recognizes the original source of this comics, please let us know.
Posted by Kaya Özkaracalar at 11:36 PM No comments:

Prior to the introduction of the Latin alphabet in 1928, the Arabic script was used in Turkey. The illegibility of pre-1928 Turkish publications to subsequent generations in Turkey has caused a void in knowledge about such items. Hence, the history of comics in Turkey before 1930s has been documented very little. Çocuk Dünyası, a children's magazine published between 1913-14, is one of the earliest Turkish publications known to sparadoically print gag-comics. The scans in this post are from the first 49 issues, in my collection, of its 79 issue run. The scan above is of the first appearance of a gag-comics in this publication; titled as 'Devekuşu ile Maymun [The Ostrich and the Monkey]', it was printed in no. 10, dated May 16th, 1913.
The next issue, no.11, dated May 23rd, 1913, carried the below one and a half page item titled 'Hayvan Hikayeleri: Tavşan ile Tilki [The Animal Stories: The Rabbit and the Fox]': 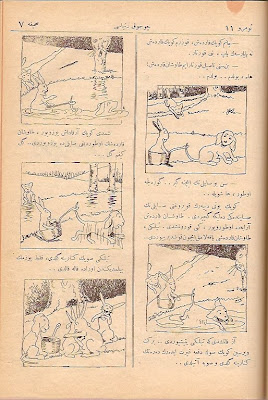 Note that the Arabic script requires a reading directed from the right to the left. Whether this item should be called a comics with text beneath the panels or simply an illustrated story is open for debate. Nevertheless, the illustrations are framed as panels even though they are not ordered in rows.

The below strip was serialized in two issues: 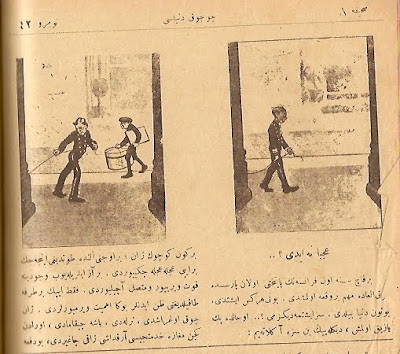 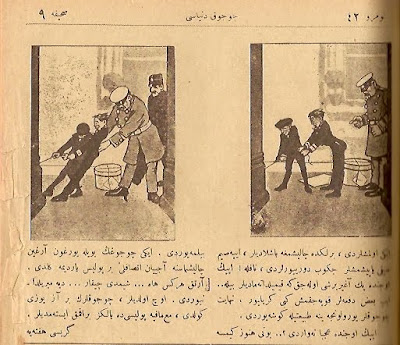 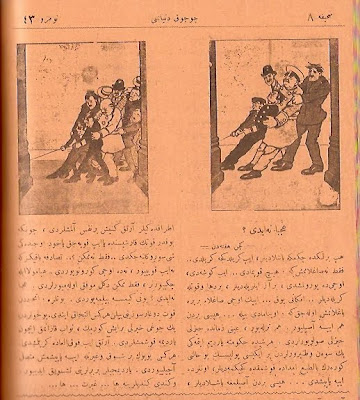 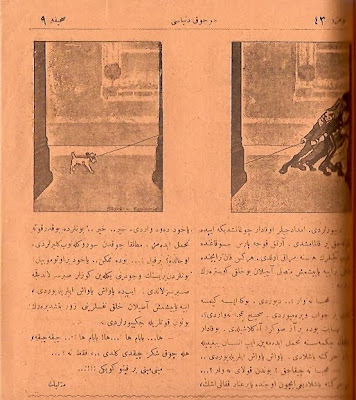 Note the last panel carries the signature Sewell Collins.
The below scan, titled as 'Yazısız Hikaye [Story Without Text]', is from no. 46, dated Jan. 23rd, 1914: 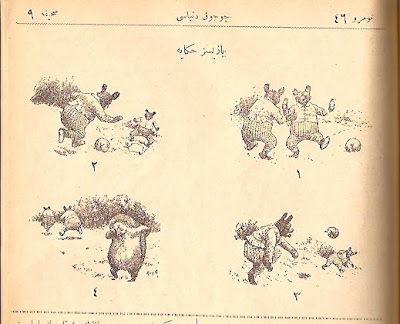 Gag comics were also apparently published in another Turkish children's magazine of the same era, Çocuk Duygusu (see Esin Bayraktar, 'Yazısız Hikaye', Serüven [2nd series] no. 2 (Summer 2006), pp. 62-65 *).
* Bayraktar identifes the publication date of Çocuk Duygusu as 1911, but other sources note it as from 1913-14. In the same article, Bayraktar also covers comics published in Çocuk Dünyası which she also misidentifies as being from 1911.
Posted by Kaya Özkaracalar at 12:42 PM 1 comment: 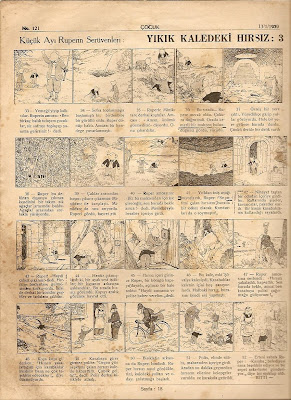 The ever-popular British comic strip Rupert Bear, created in 1920 for Daily Express and still running today!, was serialized in Turkish children's magazine Çocuk in the late 1930s as 'Küçük Ayı Ruperin Serüvenleri [The Adventures of Ruper the Little Bear]'. The above scan is from no. 121, dated Jan. 13th, 1939, and features the third and concluding installement of an episode titled as 'Yıkık Kaledeki Hırsız [The Thief at the Ruined Castle]'.
Rupert Bear was created by Mary Tourtel (1874-1948), the wife of Daily Express' editor. The episodes reprinted in Turkey are probably by Alfred Bestall, who had taken over in 1935.
Posted by Kaya Özkaracalar at 1:43 PM No comments: