'Mystery of Little Snake', serialized in Britain's Mickey Mouse Weekly no.'s 152-161 in 1938-1939, is my most favorite 'King of the Royal Mounted' adventure. It involves the attempt of a bunch of baddies to lay their hands on a loot of gold which a tribe of natives are believed to be hiding in the secret burial ground of reserved for their chiefs. For this end, they murder the current chief of the tribe and plan to discover the secret location by trailing his son. The new chief is perfectly aware of their intentions and wisely hopes to use it as an opportunity to avenge his father... Thus, a tense journey starts as three groups, the native carrying the corpse of his father, the baddies, and King accompanied by 'kid' (the little brother of his lover) travel through the snowy terrains towards a destination unknown to all except the native to reach their fate where death is certain to meet some or all of them. 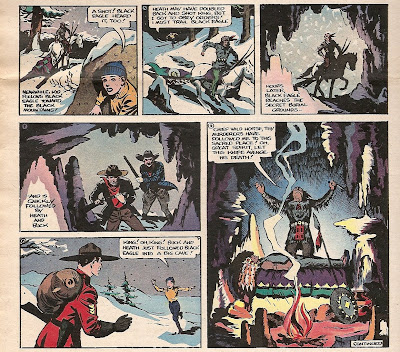 The climax is reached as the baddies follow the chief into a cave he had went in, effectively passing the point of no return in this wonderfully colored panel:

King breaks into the scene, resulting in not only a confrontation with the baddies, but a stand-of with the chief:

Despite this artistic blunder, the face-off between King and the native is highly dramatic as both face the burden of obeying their own laws which necessiates unwillingly confronting each other. 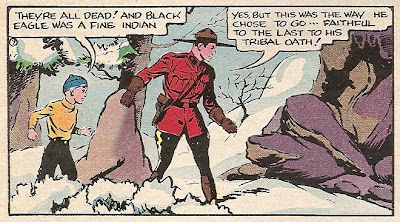 Posted by Kaya Özkaracalar at 6:02 AM No comments:

KING OF THE ROYAL MOUNTED AND THE CIRCUS HORRORS 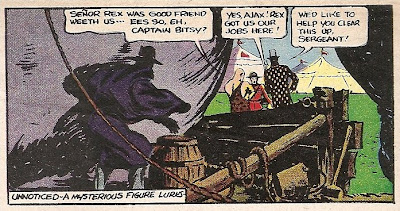 The earlier adventures of King of the Royal Mounted published in Britain's Mickey Mouse Weekly (maybe I should paraphrase that as those published earlier in MMW as I cannot confirm whether the British publication followed the sequence of the adventuıres as they were originally run in the US newspapers) had a decidedly authentic tone as they often involved ordinary trappers and other locals of the Canadian countryside in their daily lives and were set in mountainous lanscapes. Eventually, the adventures took a turn in which the plots became more familiar comic-strip fare, such as 'The Terror of the Big Top' serialized in MMW no.'s 174-182 in 1939 where Sgt. King investigates a murder in a circus. The above panel is from the installement in no. 175, involving a dark, cloaked figure which had become a not-so-rare visual motif in the comics of the 1930s in the wake of The Bat Whispers (1930); below is a still from this mystery-thriller movie (whose Bat character was also an inspiration for the Batman): 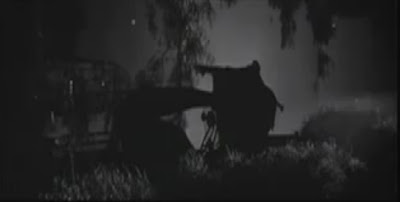 And the below sequence from the installement in the next issue involves the 'murder of a subject who is just about to disclose the identity of the culprit' theme so often seen in comics: 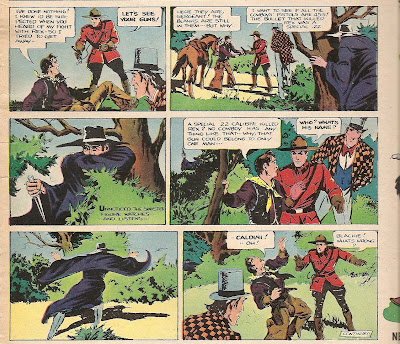 The trapeze act in the below sequence from the installement in no. 178 provides an excuse for the first and only instance where some female flesh is displayed in any King of the Royal Mountain adventure that I've seen: 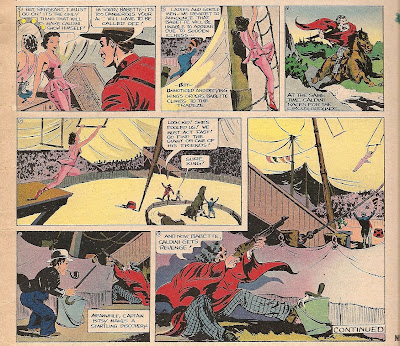 And the below segment from the installement in the next issue makes good opportunity of the circus setting for a tigers-set-on-loose sequence: 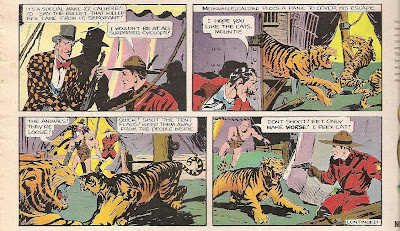 Posted by Kaya Özkaracalar at 4:21 PM No comments:

KING OF THE ROYAL MOUNTED AND THE PERILS OF FILMMAKING 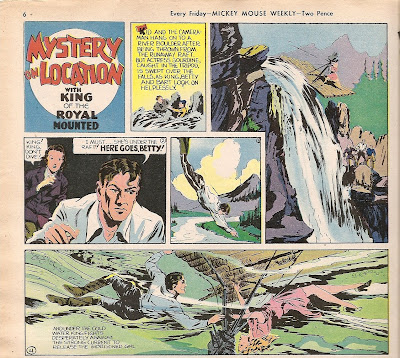 No, this post is not about any of the film adaptations of 'King of the Royal Mounted', but rather about an adventure in which Sgt. King, upon the request of his girlfriend Betty Blake who has taken up the job of a scriptgirl, investigates suspiciously frequent accidents occuring during the shooting of a film. Titled 'Mystery on Location', it was serialized in Britain's Mickey Mouse Weekly no.'s 183-193 in 1939 (I don't know the date of its original run in the US newspapers); the above scan is from MMW no. 187. King's suspicions zero in on none other than the director himself, as in the below sequence from no.'s 189-190 whose coloring I especially like: 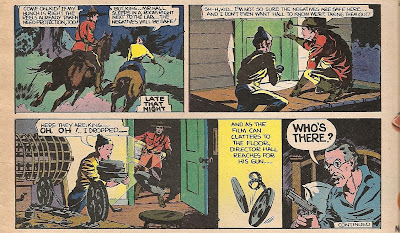 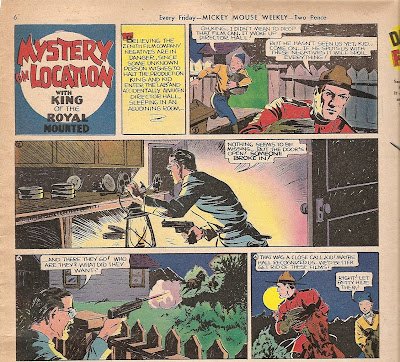 'THE WILD MAN OF THE WILDERNESS' 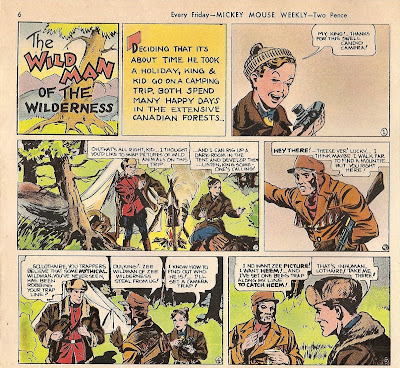 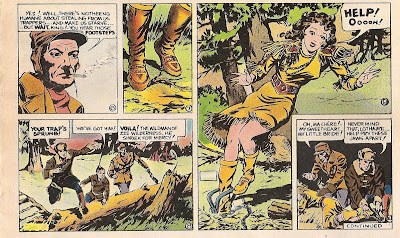 Above scan (broken into two due to the size of my scanner), featuring the first installment of a King of the Royal Mounted adventure titled 'The Wild Man of the Wilderness', is from the color central pages of the no. 214 (dated March 9th, 1940) of Britain's Mickey Mouse Weekly. 'The Wild Man of the Wilderness' concerns a mysterious title character stealing pelts of trappers. The art is pretty good with impressive splash panels and some decent rendering of good-looking women, as in the below panels from no. 216: 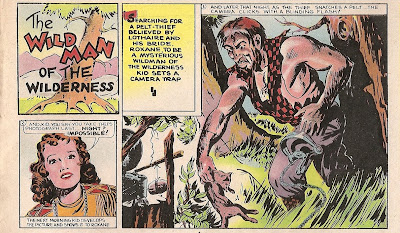 I also like how the utilization of a windy and snowy setting contributes to the establishment of a moody atmosphere in the below panels from no. 219: 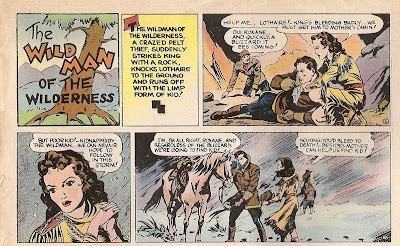 And below is a nice action sequence from no. 222: 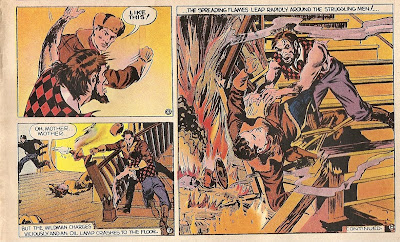 I am not certain about the artist working on 'The Wild Man of the Wilderness'. The art chores of 'King of the Royal Mounted' had passed onto Jim Gary from Charles Flanders in 1939 and 'The Wild Man of the Wilderness' was serialized in MMW early in 1940, but this British magazine was probably running the American strip with some delay from its original run in the US newspapers, so its original run might have corresponded with the tenures of either Flanders or Gary.
'King of the Royal Mounted' is credited to famous Western writer Zane Grey, but Zane's byline was used for publicity purposes and the actual scriptwriter(s) of the strip are anonymous. The character is widely regarded as the brainchild of Stephen Slesinger, a literary agent who was one of the pioneers of merchandising popular literary characters. Eventually, Slesinger also conceived the idea of creating original characters and the Canadian mounted lawman King of the Royal Mounted was born. The Sunday strip kicked off in Feb. 17th, 1935 and the daily less than a year later; the original artist was Allen Dean who would eventually be replaced by Flanders. The strip would be popular enough to be adapted into the silver screen as a feature movie in 1936 and as serials in the early 1940s. It would also spin-off comics books headlining the title character who would remain in syndication till the 1950s.
Posted by Kaya Özkaracalar at 11:55 AM 1 comment:

Above scan is of the first strip, dating from March 22nd, 1937, of 'Buck Ryan', a long-running British private detective serial, as reprinted in Buck Ryan volume 1: A Lady Vanishes by Newspaper Daily Comic Strip Library.
Buck Ryan was originally ran in Daily Mail, the British newspaper which pioneered British newspaper strips. Launched in 1903 by Alfred Harmsworth, the British media mogul who was also responsible for the boom of British comics magazines, Daily Mail had been running strips since 1904 including 'Mrs Hippo's Kindergarten', a historically important strip as Tiger Tim, soon to be a major British juvenile comics hero, made his first appearance there. However, the full-fledged proliferation of British strips in DM would occur in the 1930s and 'Buck Ryan' was created in that period. Writer Don Freeman and artist Jack Monk had initially created an Edgar Wallace adaptation strip, but reportedly had to to drop that one due to copyrights issues and created 'Buck Ryan' as a replacement. 'Buck Ryan' would be successful enough to run until 1962.
The first 'Buck Ryan' continuity, titled as 'A Lady Vanishes' in the reprint volume cover, has mediocre art and acceptable but undistiguished narrative about a kidnapping scheme. Visually the most interesting sequence is in the below strips: 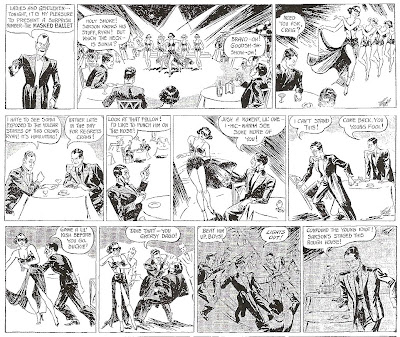 However, the great visual potentials of an opium den setting is simply unexploited and wasted:

The same setting, on the other hand, is utilized for the utterance of some racially degrading jargon:

A noteworthy aspect of 'A Lady Vanishes' is the presence of remarkably brutal instances of violence against women, far more shocking than found in American mainstream strips of the same era as far as I am aware, one of which is in the below strip:

There are a few instances of pretty decent action sequences as well, such as the below strip:

There is also a relatively high body count:

I've also purchased vol. 9 of NDCSL's Buck Ryan reprint series and can attest that the strip had improved in terms of both art and story in two years from its inception. At some point in the future, I hope to post about that extremely interesting war-time (and war-related) continuity titled 'The Mystery of the Silent Bomber' as well. Artist Jack Monk would stay on board 'Buck Ryan' till the very end, but writer Don Freeman would eventually be replaced by others. It should be pointed out that this British comics writer (1903-72) should not be confused with an American children's books author and illustrator with the same name. The British Freeman would also contribute scripts to other leading Daily Mail strips such as 'Jane' and 'Garth'.
Newspaper Daily Comic Strip Library's reprint series appear to be computer printouts, but are quite acceptable in quality and the producers must be congragulated for the effort they put into compiling them. As I'd noted in an earlier post, these are the only available English-language reprints of Buck Ryan.
Posted by Kaya Özkaracalar at 12:37 PM 2 comments:

Above scan of Basil Reynolds' Marmaduke strip from no. 187 (dated Sept. 2nd, 1939) of Britain's Mickey Mouse Weekly is a testament to times of a different attitude towards smoking...
Posted by Kaya Özkaracalar at 5:07 PM 1 comment: