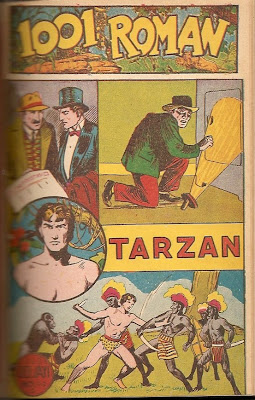 In the below post on this blog, I had covered Turkish artist Ekrem Dülek's 'Boğaç Han' comics serialized in Çocuk Haftası in 1943-44. Dülek is also credited as the artist for an odd Tarzan comics published in the no. 43 (dated Sept. 3rd, 1943) of the monthly "special issue" series of 1001 Roman from the same publisher, Tahsin Demiray. Titled as 'Tarzan ve Numa' [Tarzan and Numa], this is the only instance I am aware of where a comics credited to a Turkish artist had been published in 1001 Roman.
'Tarzan ve Numa' appears to be partially based on the 'Lion' story in E.R. Burrough's Jungle Tales of Tarzan (1919). The first 8 pages of the comics where Tarzan sets out to save a gorilla snatched by Numa the lion is a fairly faithful adaptation of the introductory section of this story. 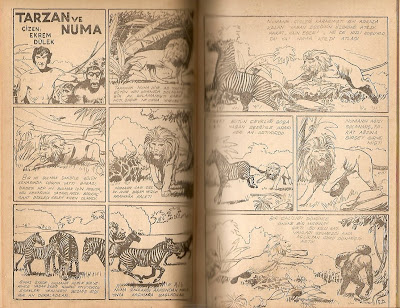 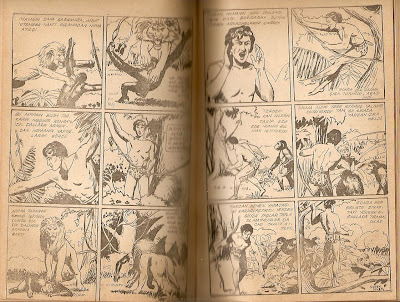 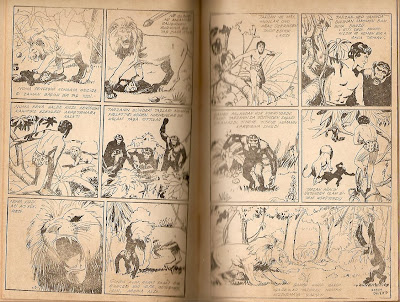 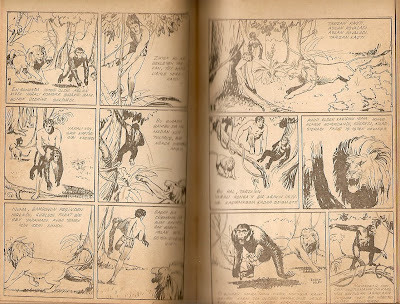 Afterwards, the plot of the comics digresses from that of the original story. Tarzan sees natives carrying the carcass of a lion, but finds out that it is not Numa: 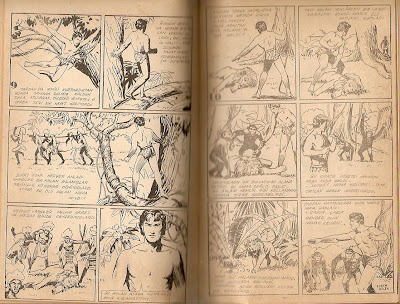 Just when Numa appears on the scene, the natives come back to assault Tarzan and his apes.. 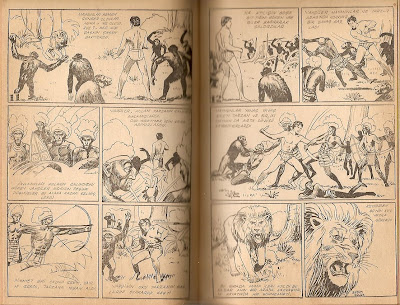 .. but Numa joins in the fight against the natives and hence Tarzan befriends the lion in the end: 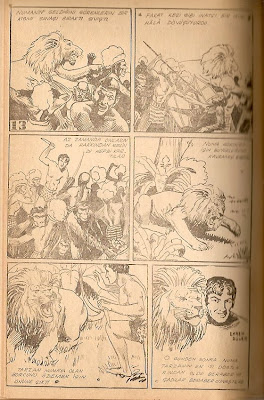 I suspect Dülek might have created this comics by tracing from and/or redrawing one or more foreign source. If anyone recognizes any one or set of images from elsewhere, please let us know. For example, a possible source might be the French Tarzan et le lion (1937) album from Hachette, which I haven't (yet) seen.
Source for Jungle Tales of Tarzan plot summary: http://www.erblist.com/erblist/jtalessummary.html
Coming soon in this blog: Turkish-made Son of Tarzan comics serial from 1945!!..
Posted by Kaya Özkaracalar at 2:31 PM 2 comments: 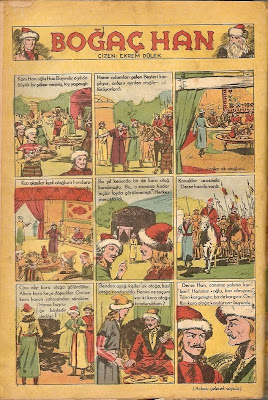 Above scan is of the back cover of no. 42 (dated Oct. 16, 1943) of Turkish children's weekly magazine Çocuk Haftası [Children's Week], featuring the first installement of the comics serial 'Boğaç Han' by Turkish artist Ekrem Dülek. The first Turkish comics artist (who received printed credit for his work) was Orhan Tolon who had worked extensively in the 1930s, creating several series of humorous juvenile adventure strips, most of which had utilized speech balloons. However, when he made his first realistic non-humorous comics, the historical epic 'Deniz Kurtları' which preceeded 'Boğaç Han' in Çocuk Haftası in the earlier issues of this magazine, he had curiously resorted back to the format of extra-panel text captions, omitting the use of speech balloons and captions inside panels. 'Boğaç Han' became the first non-humorous Turkish adventure comics utilizing speech balloons (actually, speech 'rectangles', as can be seen in the above scan) and captions within the panels without resorting to extra-panel text captions.
'Boğaç Han' is based on a medieval Turkish folktale. It starts with the public humiliation of a Turkish nobleman during a royal feast because he has no children. The nobleman returns home to scoff at his wife, he urges him to do good deeds and expect heavenly reward for these in the form of a child. He takes upon his wife's advice who soon begots him with a male child. The child grows up and shows extraordinary bravery and strength by overcoming a bull at a royal feast years after his father's earlier humiliation; the nameless child is thus publicly named as 'Boğaç', meaning "like a bull" in Turkish (no. 46): 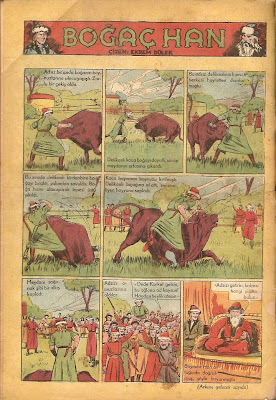 Later, in an episode not included in the versions of the folktale which I am aware of and hence marking the only digression of the comics from its original source, Boğaç snatches another nobleman's daughter as his bride (no. 53): 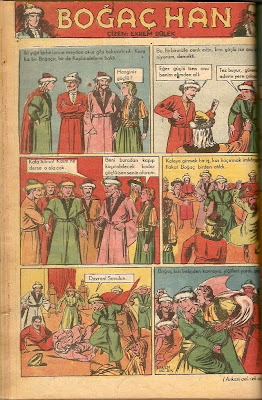 Meanwhile, some subordinates of his father has become jealous of Boğaç and persuade the nobleman that his son is keen on ousting him and urge him to assassinate Boğaç, which he does; however, unknown to the plotters, Boğaç actually survivess the assassination and is secretly nursed back into health by his mother (no. 55): 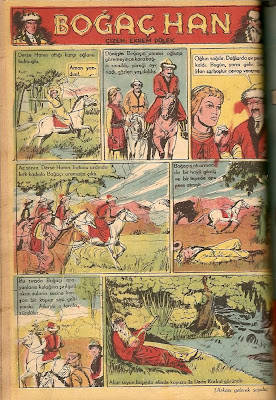 When the plotters become aware that Boğaç is alive, they decide to kidnap his father and deliver him to the nobleman whose daughter Boğaç had forcibly taken as his wife. Nevertheless, Boğaç rescues his father (no.'s 61 and 62): 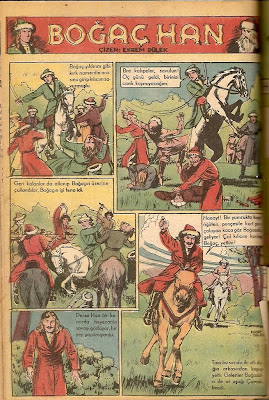 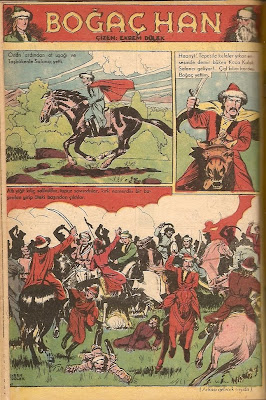 It all ends happily with the reconciliation of the father and son (no. 63): 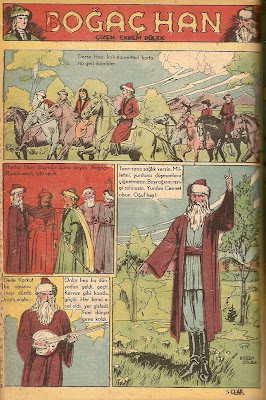 The bearded person in the last panels as well as in the right side of the logo is a depiction of Dede Korkut, the wise old man who comments on the developments -the compiler and narrator of these mediveal tales collectively known as 'Dede Korkut Hikayeleri [Dede Korkut Tales]'.
Subsequent issues of Çocuk Haftası, which lasted till 1950, included several other comics, some of which were based on other Dede Korkut tales, by new Turkish artists such as Sururi Gümen, Mehmet Tekdal and Şahap Ayhan besides foreign material such Felix the Cat, Prince Valiant and some Yugoslavian comics. Çocuk Haftası was published by Turkish print media mogul Tahsin Demiray (see post on Oct. 25, 2009 for info on Demiray) and edited by Rakım Çalapala.
Posted by Kaya Özkaracalar at 12:26 PM No comments: