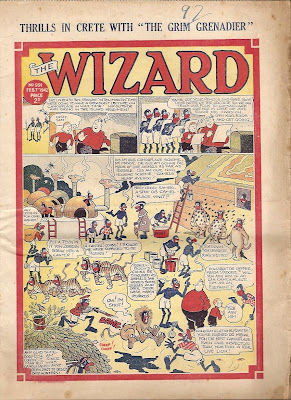 Above scan is of the cover of no. 991 (dated Feb. 7th, 1942) of British children's weekly The Wizard, featuring the humorous comics known as Spadger's Isle by British artist Chick [Charles] Gordon (c.1890-1952). As can be seen in the above example, Spadger's Isle depicted African natives of an island ran by two Brits in 'funny' situations. The above example is also noteworthy for integrating World War 2 context. Spadger's Isle was reportedly very popular and published on the covers of The Wizard throughout the 1940s. The Wizard itself was a very long-lasting magazine, running from 1922 to 1963. It was published by D.C.Thompson, a major British publisher who had also put out the influential comics magazines Dandy and Beano. The Wizard, however, featured mostly illustrated stories rather than comics.
Posted by Kaya Özkaracalar at 11:01 PM No comments: 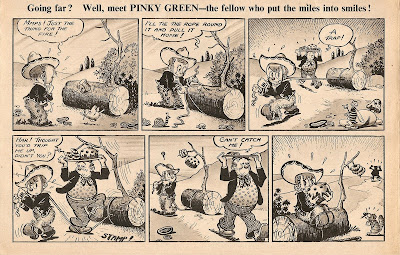 Above scan is from no. 217 (dated Mar. 30th, 1940) of Britain's Mickey Mouse Weekly, featuring the debut of Basil Reynolds' Pinky Green half-page strip.
Posted by Kaya Özkaracalar at 2:22 AM No comments: