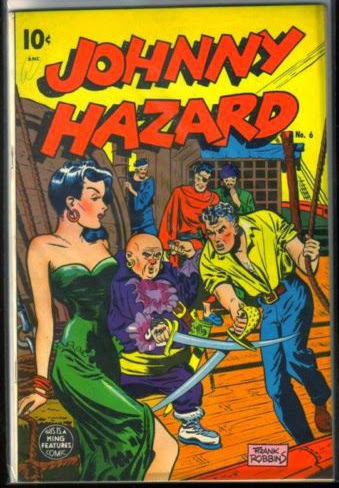 'Johnny Hazard' was an aviation strip created by Frank Robbins for the King Features in 1944, that is during the 2nd World War. The title character was a pilot serving in the US military. However, after the 2nd WW ended, he became a freelance pilot and began having various adventures around the world as a civilian. The above image is of the cover of the no. 6 of the short-lived Johnny Hazard comics from the late 1940s. The strip itself continued well into the 1970s however, with Robbins at the helm till the end.
In Turkey, The 'Johnny Hazard' daily strip, as well as its Sunday counterpart, began to be ran in the daily Milliyet newspaper on Oct 1st, 1954, beginning with the 'On the Half Shell' continuity originally dated from about a year ago (*).
All online sources I came across say the The 'Johnny Hazard' strip ended in 1977. In Turkey, it indeed ended on Dec. 7th, 1977, becoming the longest running adventure strip in Milliyet. At close inspection, that particular last daily published in Milliyet appears to be originally dated from Oct. 9th, 1976, which is actually in conformity with the one year lag the strip had initially started its Turkish run. However, this daily does indeed sound, at least in the Turkish translation, as the ultimate end of Johnny's adventures. After Johnny had got rid of the episode's baddie in the previous dailies, his female companion unexpectedly bumbs him off her car, saying "We had met suddenly and we are breaking up suddenly." When the surprised Johnny calls "Stop! You cannot leave me here like this!", she retorts that "Tough guys like you shouldn't say such sad things." In the last panel, Johnny thinks that "it is time to retire..."

If anybody out there knows if this is indeed the end of Johnny's adventures or if there were one more year of subsequent adventures, please let us know.

(*) A nice overview of Johnny Hazard's adventures from the early 1950s is here: http://ipcomics.wordpress.com/2006/09/17/around-in-europe-with-johnny-hazard/
Posted by Kaya Özkaracalar at 3:56 PM

I’m glad to see you revive your blog, welcome back. I was only peripherally familiar with Frank Robbins’ Johnny Hazard previously, but did know a little about Scorchy Smith. Thanks for blogging about Robbins’ works.

Overall Johnny Hazard strikes me as being in the vein of Milton Caniff’s Terry and the Pirates & Steve Canyon, which I remember from newspaper comic strips, some of which in reprint. On that line, I did a little digging as was surprised how much Caniff’s work changed from the earliest style of drawing of Terry and the Pirates.

Along that line, there is an interview with Alan Kuppenberg in which he says he was influenced by Robbins and Caniff http://www.alankupperberg.com/invaders.html