DEBUT OF 'PRINCE VALIANT' IN TURKEY 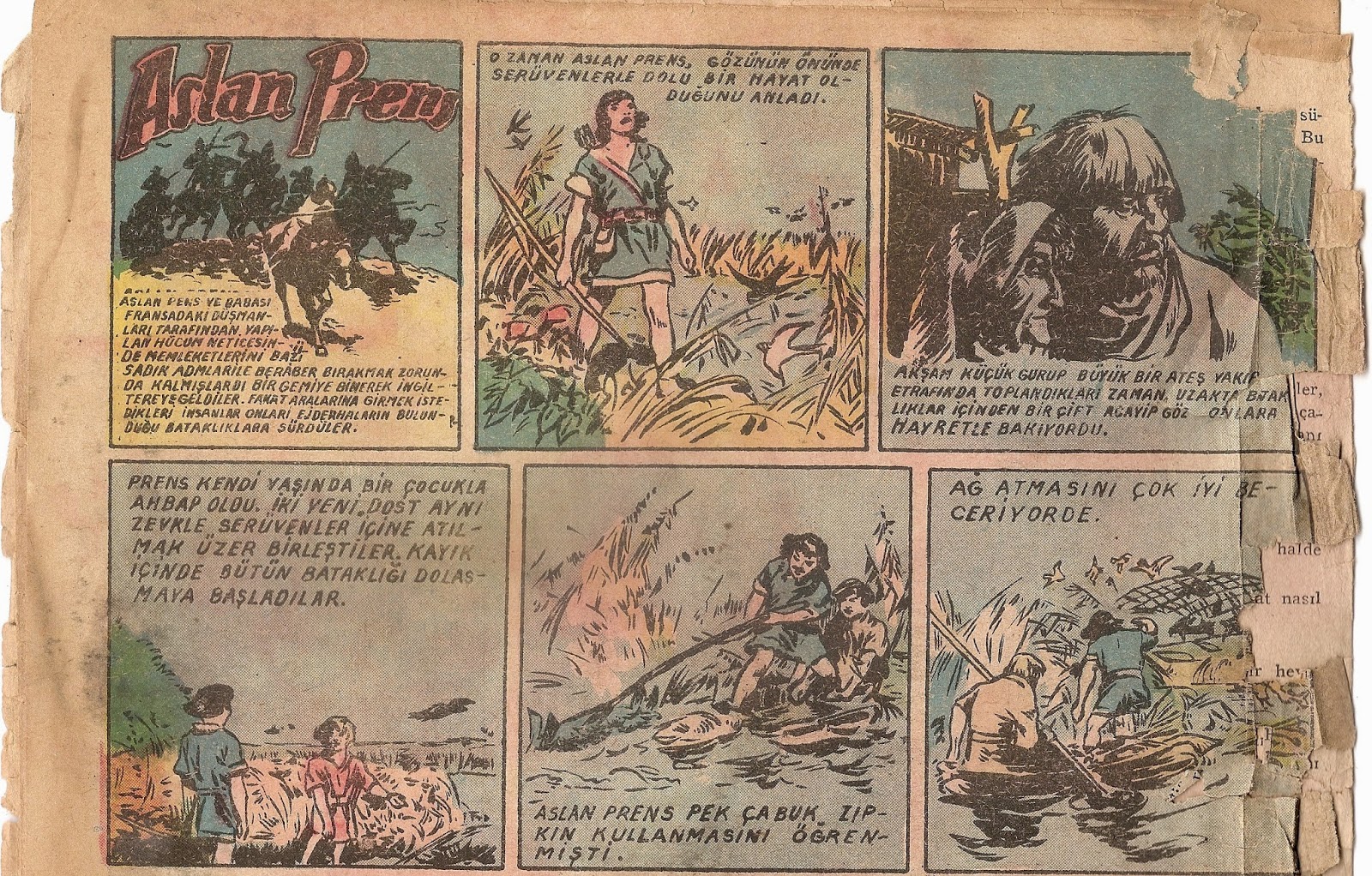 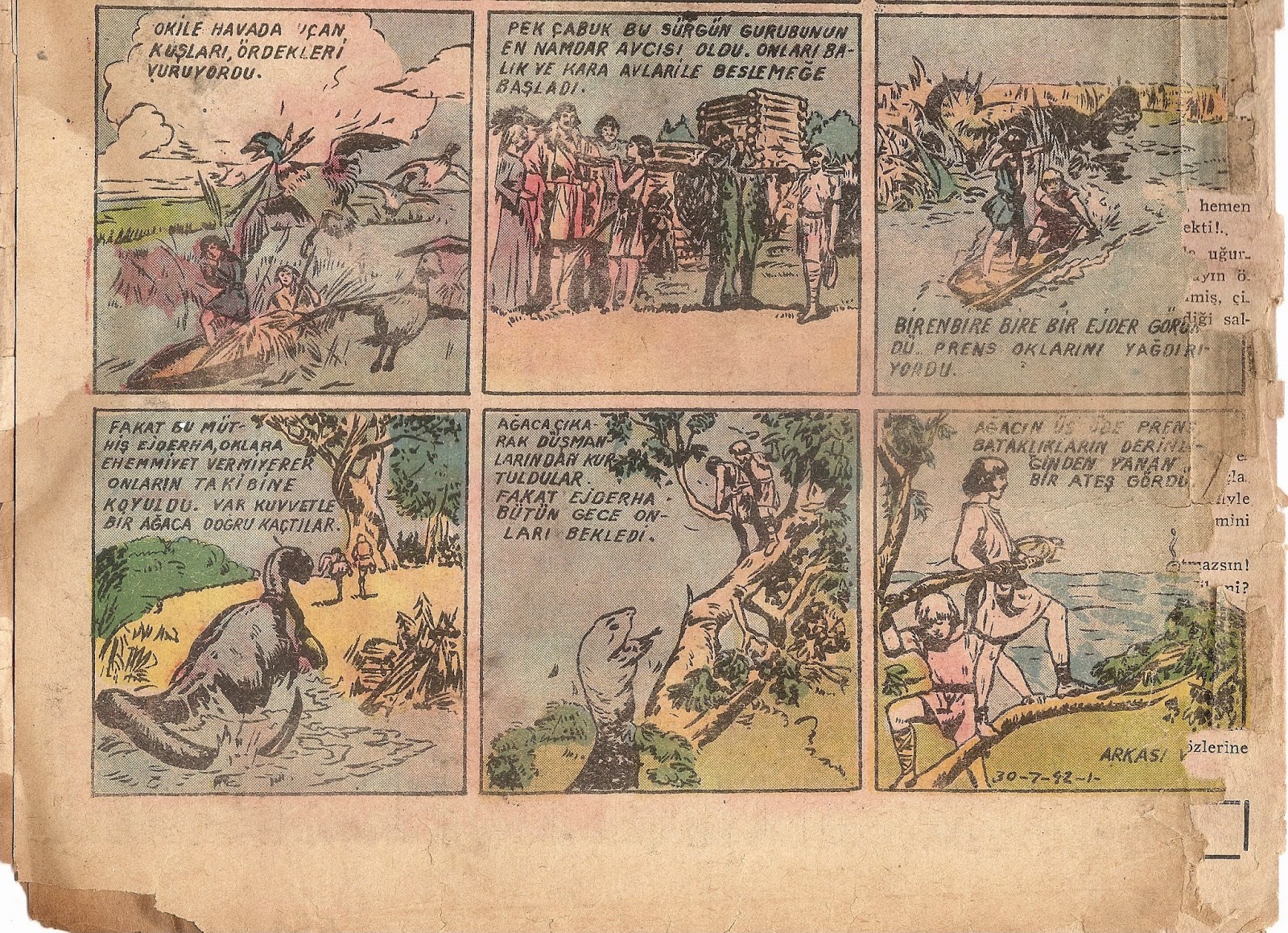 I am not a big fan of Hal Foster's famous Sunday newspaper comics 'Prince Valiant', largely because I am not a fan of swashbuckling type of comics in general unless they feature a large dose of fantastic elements and partly because of its lack of speech balloons, but I, of course, admire its high quality art and acknowledge its sway over a large body of comics readers. In addition, 'Prince Valiant' was apparently very influential on young and aspiring Turkish comics artists in the 1940s. For all these reasons, I feel obliged to record its early publication history in Turkey.
'Prince Valiant' debuted in Turkey with a five-years delay in the last page (back cover) of the first issue, dated July 30th, 1942, of the 3rd series of the weekly children's magazine Afacan as 'Aslan Prens [Lion Prince]'. Afacan had largely skipped the first-ever three 'Prince Valiant' Sundays chronicling the arrival of Valiant's clan to Britain and started its run with the fourth Sunday from March 6th, 1937 in which Valiant's first adventure really kicks in. Three panels from this Sunday were also omitted and replaced with three panels from the earlier Sundays, including the first-ever panel where Valiant had made a solo appearance, to provide an introduction. The next installment in the subsequent issue however presented the next Sunday in its entirety: 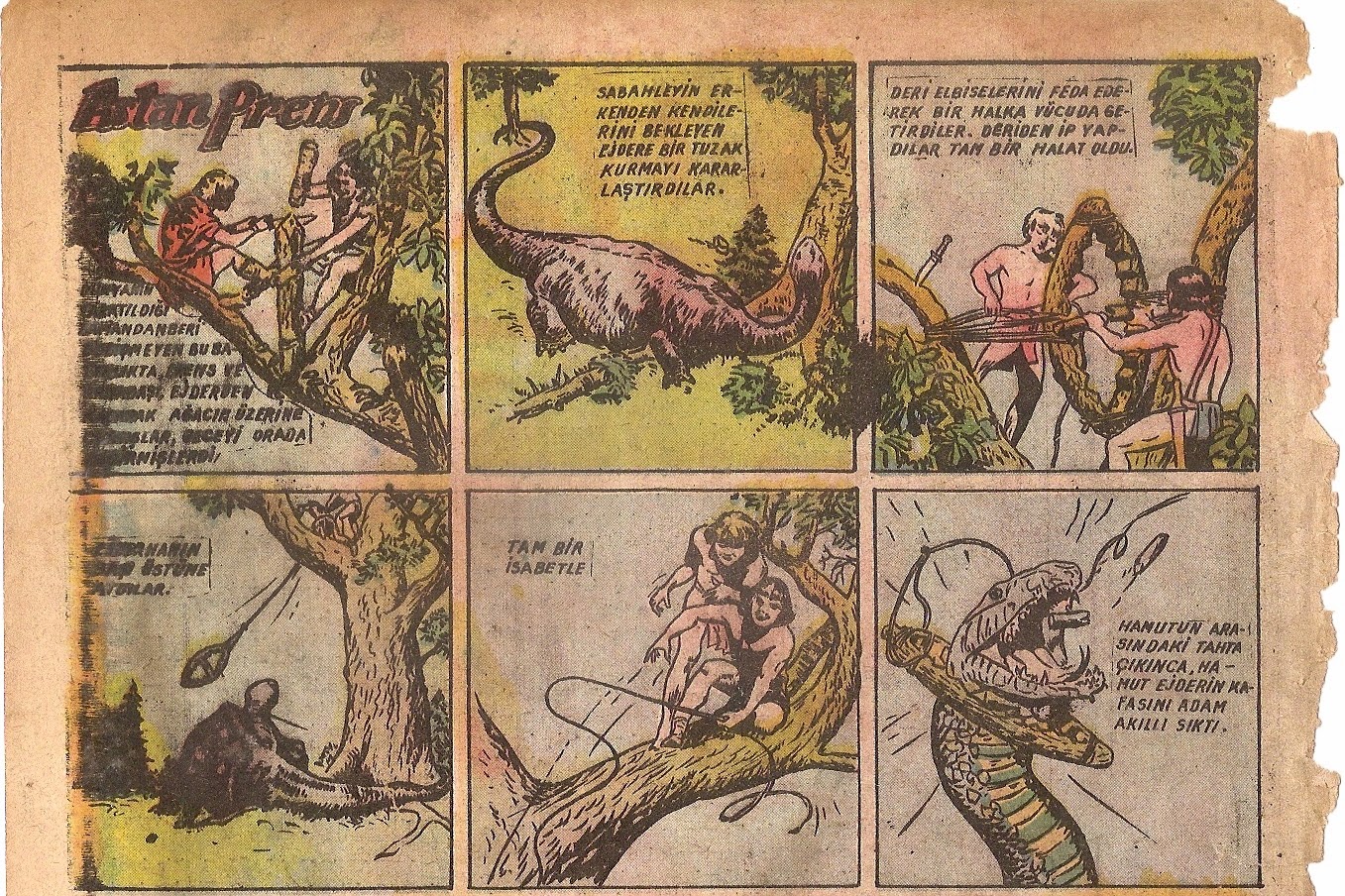 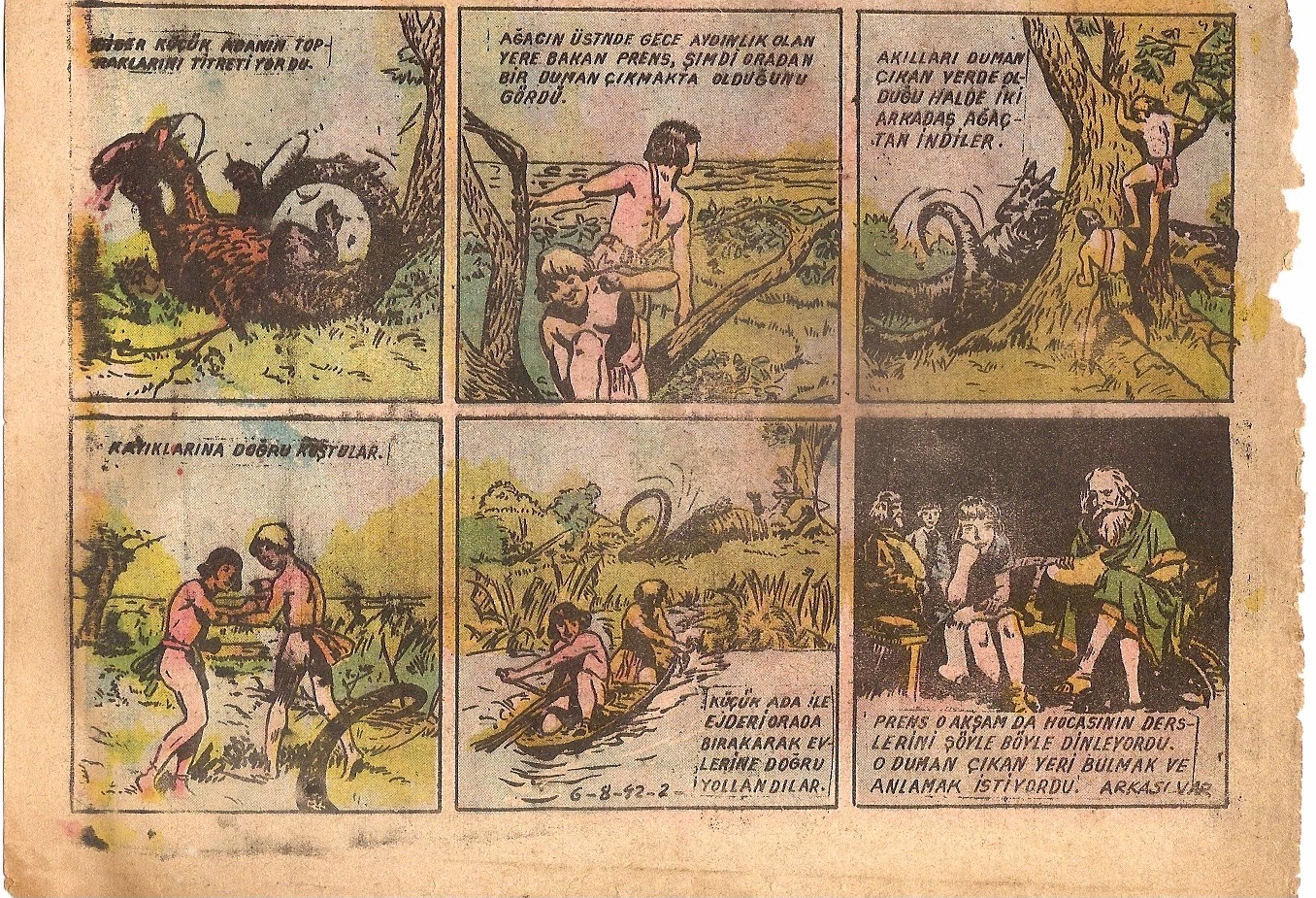 Afacan would cease publication in 1943 due to war-time economic hardships, including shortage of paper. Prince Valiant's reappearance in a Turkish publication would come up next year, but re-titled as 'Aslan Tekin' and presented as a Turkish character, "son of the khan of the Seljuks", in the Turkish translation! Below is the scan of the first installment of this new edition in the back cover of the no.89, dated Sept. 9th, 1944, in the weekly children's magazine Çocuk Haftası: 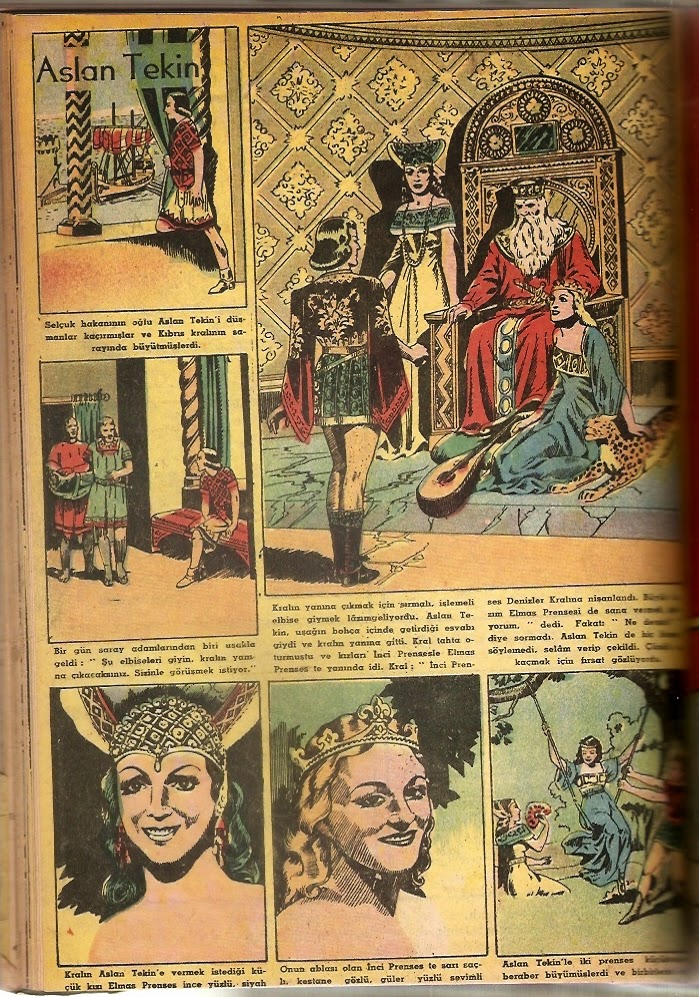 Posted by Kaya Özkaracalar at 11:43 AM

I’d like to thank you for introducing me to the Turkish version of Prince Valiant. Although I didn’t start reading Hal Foster’s newspaper series until the 1960s, it was always a treat to get the Sunday papers to see how Val and his offspring fared for the week. Although the series initially jumped around time irritatingly, especially early on, it was still fairly historical for the average reader, introducing them to historical events that they might not have been exposed otherwise. For many readers these historical periods and events were only faintly covered in school and it may have spurred readers to follow up an episode with a trip to the library. This was long, long before the internet and even before smart phones – dinosaurs walked the earth & etc.

A little quick research will show how important Hal Foster’s work was to younger aspiring artists. I was never a rabid fan of Prince Valiant and not terribly interested in his Tarzan series, but I liked his slightly-old fashioned art and the narrative style vs word balloons, which set a more serious narrative tone.

It would be interesting to see a side-by-side comparison between the English and Turkish publications, especially the later Aslan Tekin version. I have to wonder about how the Turkish editors dealt with some of the issues of translation and historical perspective. Certainly making Val of Seljuk would be more recognizable character origin than on one who came from Thule and settled in Britain. Foster seemed to avoid a lot of stereotypes and pratfalls of writers of the period, showing he was not mere pulps writer. A number of the hard back books with black and white illustrations came into my hands over the years and it was nice to read a story arc complete without weekly episodic interruption. Really these books were much better without the color and inherent loss of quality of newspaper printing. Thank you again and I look forward to your next post.