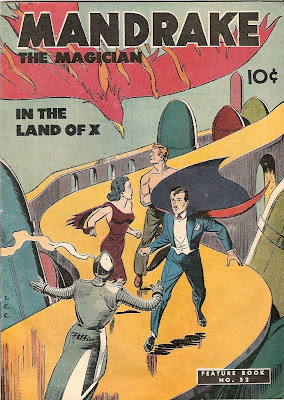 Mandrake the Magician's first foray into science-fiction was with his 5th Sunday newspaper comics continuity, 'Chamber into the X-Dimension' from 1936-37. This adventure was one of the few Mandrake adventures reprinted in comics book format in the post-war era. Retitled as In the Land of X, it was published as no. 52 of David McKay Co.'s Feature Book series in 1948. I recently bought a copy of this issue from ebay and today read it, my first exposure to this truely marvelous adventure properly in its original form in color and in English.
Mandrake and Lothar meet scientist Prof. Theobold who had, "by means of molecular disintegration and atomic bombardment", invented a chamber through which one can be transferred into the "X Dimension." Professor is very distressed because his daughter Fran had volunteered to discover this new dimension, but hasn't returned from it. So, Mandrake and Lothar volunteer to search for her: "Lothar and I have been everyhere else. The 'X' Dimension sounds interesting. Lead the way, professor." In the X Dimension, our heroes are captured by metal men who use the human population as slaves for hard labor. Fran, who has also been captured, explains to Mandrake (p.9): 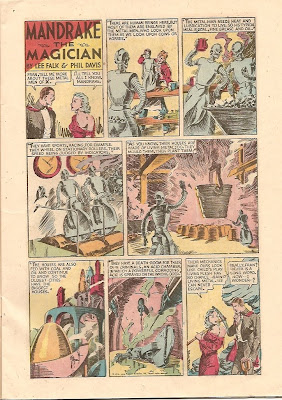 Our protagonists manage to flee during an attack of a "fire-bird" on the metal men (p.11): 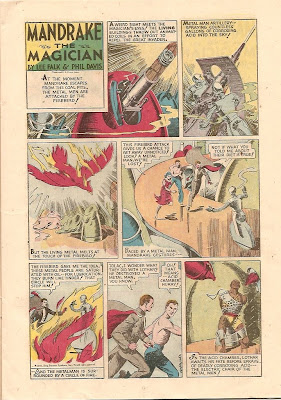 Outside in the wilderness, they meet peaceful plant men, which provide an opportunity for laughs as Lothar (who, by the way, speaks in pigeon English and refers to Mandrake as "master" in this era of white supremacy) vainly tries to feed himself off the plants. Next, they are captured by crystal men who are even more vicious than the metal men as they skin humans alive!, note how perceptive Mandrake is in the fourth panel below (p.19): 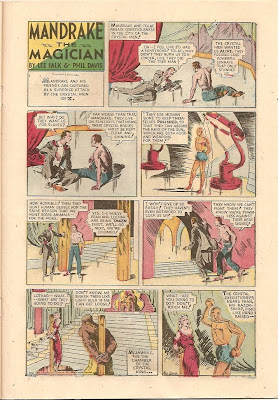 Just when they thought it was safer to jump into the waters of a lake by the city of the crystal men than to face them again, our heroes face one more and an unexpected peril (p.22): 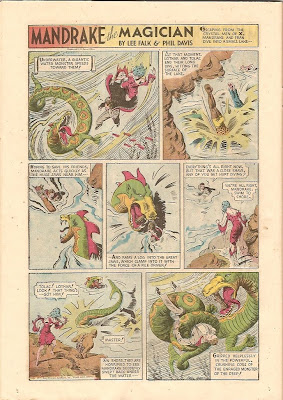 No worries, Mandrake will be saved in the nick of time by Lothar who quicky jumps with a spear in hand. For this, he gets the praise "He thought fast!". So, afterall, Lothar is acknowled as having a brain as well as muscles. The remaining pages are devoted to Mandrake inciting the humans of the X Dimension to rise up against their oppressors, the metal men and the crystal men. In the happy end, Fran, who has fallen in love with the leader of the human population of X, decides to stay in the X Dimension (just like Jane of Tarzan).
I think 'Chamber into the X-Dimension' is a minor classic of early 20th century science-fiction that, as entertainment presents highly imaginative mise-ancences in a fast-paced action-filled narrative, which at the same time embody the nightmare fantasy of a reversal of humanity's domination and exploitation of all non-human, organic as well as non-organic elements of the world.
Mandrake and Lothar would re-visit the X Dimension decades later, but that will be covered in the next post in this blog, so stay tuned in.

Posted by Kaya Özkaracalar at 1:26 PM

I never saw this storyline before! It really is a lot of fun. The Flash Gordon influence is strong both in the story and art.

Seeing this reminds me that the artwork in the early Mandrake was really strong, It makes me sad to compare it to the way the strip looks today.

Thanks for posting this.

I am glad you liked it..

The cover shot is great I found the whole comic in english minus the cover in some old newspapers in the attic.