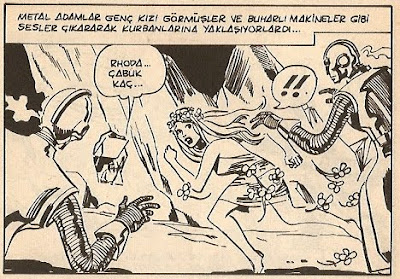 Mandrake the Magician had a few science-fiction adventures in the pre-war era, but, if I am not mistaken, none in the 1940s until 'The Amazing Ray' daily strip adventure, which involves a ray that shrinks people to miniscule size, from 1949 (probably inspired by the movie Dr. Cyclops from 1940). When science-fiction adventures became prolific in the 1950s, Mandrake's first-ever foray into the genre, 'The Chamber into the X Dimension' from 1936-37 (see below post), would serve as a model for more than one Mandrake adventure. 'The Doorway to Z', a Sunday continuity from 1952, is a watered-down remake, with another scientist inventing a doorway to an unknown world where human beings have been enslaved for hard labor by living balloon-like entities. While the gist of the plot is similar, the comical-looking rulers of Z are nowhere as menacing as the metal men and the crystal men of X. 'The Place Called X', a Sunday continuity from 1957, is very loosely related despite the designation X. Here, inhabitants of an American town and investigating Mandrake are sucked into a distant planet where peaceful (and fat and short) inhabitatants are threatened by fire people. However, Mandrake and Lothar would actually revisit the X of metal men and crystal men decades later in a direct sequel to 'The Chamber into the X Dimension' appropriately titled as 'Return to X'. Serialized as a Sunday continuity in 1974, 'Return to X' starts with Fran, who had chosen to remain in X at the end of 'The Chamber into the X Dimension', sending a distress message to Mandrake who then pays a visit to her father who had invented the chamber to travel to X. Mandrake, together with Lothar, use the chamber once again to be transferred to X where they re-encounter practically all the figures from their first visit, the metal men, the tree-men, the fire-bird and the crystal men, except the lake-monster. Actually, one panel in particular involves an exact rendition of a pose of a metal man... 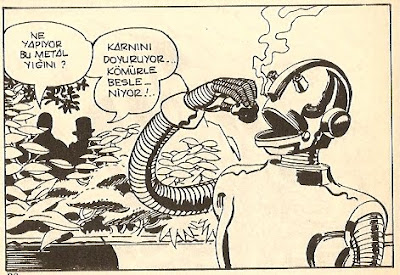 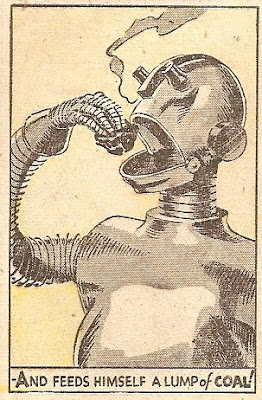 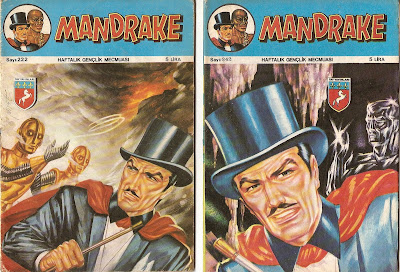 The illustration on no. 222 is signed by Aslan Şükür, the most prolific cover artist for Tay, and while I can not spot any signature on no. 242, I think it is also by the same illustrator. Note that one of the metal men in no. 222 has actually been redrawn from a panel in 'Return to X': 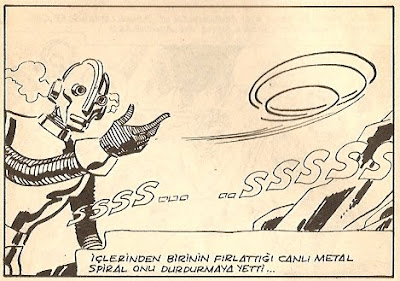 Posted by Kaya Özkaracalar at 10:48 AM