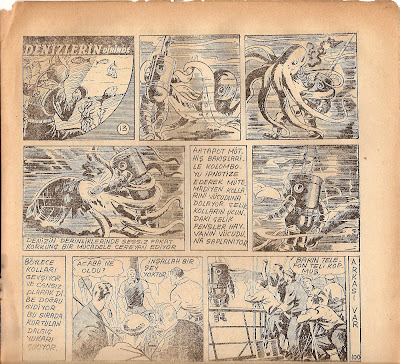 Above scan is from the no. 100 (dated June 2nd, 1941) of Turkey's comics weekly 1001 Roman, featuring the 13th installement of an obscure comics titled 'Denizlerin Dibinde [At the Depths of the Seas]' serialized between no.'s 88-119. The plot is about the search in a sunken ship for some lost documents involving a military invention. I believe it is an early war-time Italian product as the protagonists are Italian (the hero is named "Kolombo") and the antagonists are French (the illain is named "Jan"). Below is a scan of the signature of the artist that I spotted in one of the panels:

As always, any help in identifying the artist's name, the original title and source would be much welcome.
Posted by Kaya Özkaracalar at 1:22 PM