Above scans are from the no. 19 (dated Nov. 13th, 1939) of Turkey's 1001 Roman, featuring an installement of 'Gizli Ülke [Secret Country]' serialized in the first 22 issues of this comics weekly magazine on a two half pages per issue basis. This marvelous episode turns out to be part of a series of nightmarish hallucinations induced on a pair of adventurous American millionaires who were kidnapped and drugged by independence-seeking rebels of India.
'Gizli Ülke' is the Turkish edition of 'La Regina d'Atalanta', originally serialized in the Italian weekly comics magazine L'Avventuroso in 1936. While the art by Giove Toppi is highly imaginative, the underbelly of the script by Paolo Lorenzini, the director of L'Avventuroso, is shamelessly colonialist; for instance, the Indian rebels are aided by a Chinese villain!.. Below panel depicts the resistance of the rebels against the colonial troops who raid the temple where the Americans are being kept, the ringleader exclaiming "We shall not be captives." 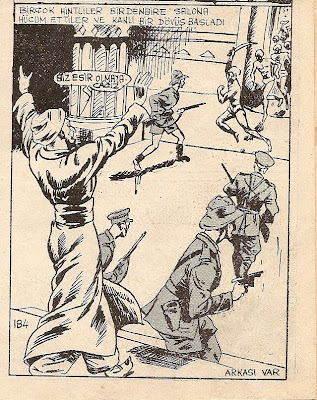